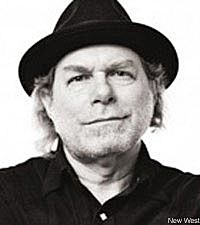 Fans of Buddy Miller will get a chance to see their hero in a rare and intimate setting in August, when he presides over three concerts at the Country Music Hall of Fame and Museum as the Hall's newly named 2010 Artist-in-Residence. The shows will re-open the Hall's prized Ford Theater, which was recently damaged by extensive flooding in Nashville. Buddy will bring his music, stories and likely a few of his friends along for the limited residence concerts, which will take place August 10, 17 and 24.

Buddy has certainly come to this distinction honestly. No Depression magazine named him the 'Artist of the Decade' for the first decade of the 21st century, and he is the current Americana Artist of the Year. His craft is an introspective music full of soul and heart that has lasted for over 30 years, and some of his strongest work has come in collaboration with his wife, Christian artist Julie Miller. The team's latest collection, 'Written in Chalk,' was so successful that along with Buddy's Artist of the Year title, the Americana Awards lauded Julie and him with Duo/Group of the Year, 'Written in Chalk' as Album of the Year, and the Julie-penned song 'Chalk' as Song of the Year. Buddy's prowess ranges from extraordinary musicianship to singing, songwriting and producing. He has co-produced albums with people like Solomon Burke and Robert Plant, and has written songs for Brooks & Dunn, Dierks Bentley and the Dixie Chicks.

Kyle Young, Museum Director for the Country Music Hall of Fame and Museum, was effusive about Buddy's upcoming appearances. "To hear Buddy on record, or to hear his songs interpreted by others, is a good introduction, but hearing and seeing him live in an intimate environment is to understand his essence and feel his humanity. In our residency tradition, we are privileged to give him our stage as his home and we are certain he will make all who attend feel as if they are sitting in his living room while he plays just for them," he said.

The Hall's eight-year-old residency program is one of its most highly respected bestowed honors. Every year, a troubadour is carefully selected who has vastly influenced popular music with a major body of stellar work. Honorees are encouraged to bring their own ideas to create a personal experience to the 213-seat theater. Among the previous honorees are lions of music such as Earl Scruggs, Tom T. Hall, Kris Kristofferson and Vince Gill.