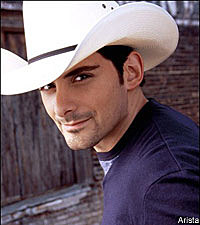 Brad Paisley was at home on Sunday afternoon when he got the news that he'd won two Grammy awards. In the pre-telecast portion of the show, Paisley took the trophies for Best Male Country Vocal Performance for 'Letter to Me' and Best Country Instrumental Performance for 'Cluster Pluck,' a track from the instrumental album, 'Play.' Fellow pickers James Burton, Vince Gill, John Jorgenson, Albert Lee, Brent Mason, Redd Volkaert and Steve Wariner join Paisley on 'Cluster Pluck,' and also in the Grammy win.

"As a player, accompanied by these guitar legends, I am beyond humbled to be in the record books along side my heroes for 'Cluster Pluck,'" said Paisley of the award, which was accepted by Jorgenson. "I am thinking tonight of my collaborators on this record that had never won a Grammy before now.