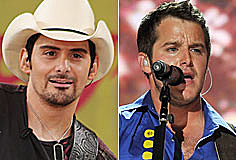 Brad Paisley is up to his old tricks again! His latest victim: Easton Corbin. The country newcomer knew that his prank-free tour with Brad was too good to be true. Easton had survived an entire summer as an opening act on Brad's H20 World Tour without any shenanigans from the country superstar -- who is notorious for pulling fast ones on his tour mates.

"We've only got about three more shows with [Brad] and since we haven't seen any [pranks] yet, I'd be very surprised if we didn't see something here in the next week." Easton said earlier this month. "Whatever happens, I'll take it like a man."

Last weekend (September 25), during the H20 tour stop in Denver, Colo., the 27-year-old saw his good-luck streak with Brad come to an end. In the middle of his set, the crooner was joined on stage by a strange looking guest he wasn't expecting ... and like his hit song, Easton just had to 'Roll With It' ... literally!

"This huge guy in a full body yellow leotard suit came up and it was pretty horrendous." Easton tells CMT Radio. "I mean, I couldn't even sing. The band was playing and I was just standing up there laughing the whole time."

When the man left the stage, Easton thought the prank was over but as he started to perform his final song of the night, 'Roll With It', he soon realized that Brad wasn't going to let him off the hook that easily.

"I start going into the chorus and I see this [bread] roll whiz by me," says the singer. "Of course, Paisley is up there throwing them. Then he runs up there and starts stuffing them down my shirt as I'm up there trying to sing the chorus and duck -- because those things kind of hurt when they hit you on the side of the head. They must have been stale."

It was another victory for prankster Paisley who admits that idle hands are what keep him stirring up trouble when he's out on tour. "When you're on the road, it can get pretty boring," Brad told People magazine last summer. "It makes me think of the British version of 'The Office.' It's kind of a daily grind. Pranking is one way to battle that boredom."

Brad's H20 World Tour wraps November 20 in Tulsa, Okla. Easton will headline his own shows for the remainder of the year (So, does that mean he'll have to start pranking himself?)