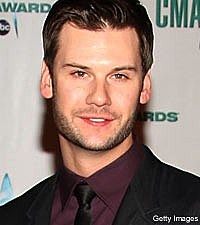 It has been two and a half months since Emerson Drive frontman Brad Mates became a first-time father. On April 28, Brad's wife, Jana, gave birth to their son, Tyler Robert Mates, in Nashville. Brad is the second Emerson Drive member to have a child, as fiddler David Pichette welcomed daughter Emma in November 2008.

"For every parent, you go through some things similar and some things completely different.," Brad tells The Boot. "The one thing Jana and I have found is we just roll with the punches. Whatever works for us and whatever seems to work for our kid is the role that we have taken now. We didn't take any birthing classes. We just read up a lot on what we should expect. There's been a lot of our friends who have gone through as many classes as you can go through before your child is born, and nothing goes to plan. So we just wanted to leave it open, and it worked out for the best. We've been very lucky to have things go the way they have with a healthy baby."

Brad himself has been lucky in many ways, including having the opportunity to spend multiple days a week at home with Tyler and Jana. When he is home, Brad lends as much help as he can to his wife by taking the night and morning shifts to give her an extra few hours of sleep each day. He also enjoys the task of changing diapers ... maybe a little too much!

"Changing his diapers is my favorite thing. I'm one of those parents who is really proud if he makes a really bad mess in his diaper. I'll be like, 'Jana! You've got to come look at this!'" Brad says with laughter. "I want to frame one of them -- that's how proud I am sometimes of what he can do in there. He's crazy!"

Brad says his newborn son is "a bit of a mixture" of both parents. "He's got Jana's forehead. She's got these four wrinkles on her forehead when she looks at me in funny ways, and he has the exact same wrinkles in the exact same spots," Brad says, smiling. "He's got my nose and my lips. We'll see what the hair does because I was blonde when I was born, and my sister and Jana were, too. I'm now dark brown, so we'll see what happens in the next few months."

The other thing which will unfold over the next several months is the direction of Emerson Drive's music now that there are two fathers in the band. "I believe in the last four years we've gone through some pretty big change when it comes to our music and writing what we write now," Brad notes. "I think it's from getting out of our 20's and entering our 30's and starting families. That has a lot to do with new parts of your life that you get to express on paper sometimes. I'm curious to see what's going to happen in the next couple of years, with David and me especially having kids now. There's just a greater meaning for going out on the road and calling this a job. We're supporting families in a big way now. It's not just ourselves. I'm excited to see what comes in the next few years."

Emerson Drive is gearing up to release their new single, 'That Kind of Beautiful,' next month. A new album is expected to be released this fall or early next year.