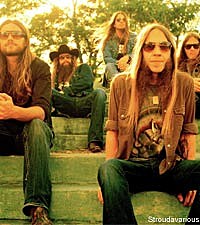 Blackberry Smoke, in the middle of a busy touring schedule that included playing BamaJam and several shows across Europe, recently released a new album, 'Little Piece of Dixie.' The 11-song CD includes a bonus track of 'Yesterday's Wine,' the Willie Nelson-penned classic made famous by Merle Haggard and George Jones on their 1982 collaborative album, 'A Taste of Yesterday's Wine.' And now, 28 years later, George returned to the studio to lend his vocals to the tune, along with his buddy Jamey Johnson.

"It was my idea. I'm proud of that," Blackberry Smoke frontman Charlie Starr boasts to Today's Country Magazine. "I was listening to George and Merle's version of it, and I asked Jamey if he wanted to record it with us. He said yes. James Stroud said he'd produce it. Ronnie Gilley brought Mr. George Jones in to sing on it. What a f---ing day! Unreal. We laid down the music in two takes, then George, Jamey and I sang it together. What a fantastic job by everyone involved!"

The group, thrilled with the recent guest appearances, already have their sights set on two other artists they hope to join forces with at some point. "To hell with genres ... Marty Stuart and maybe sing one with Pink!" Charlie says.

The group will continue their tour, which includes a gig with the Zac Brown Band on their Southern Ground cruise, through the end of September. Click here for dates.