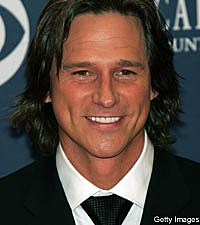 When Billy Dean crooned the romantic 'Somewhere in My Broken Heart' in 1992, he melted the hearts of female country fans everywhere. He won the ACM Song of the Year award for the tender ballad, which he shared with co-writer Richard Leigh. Last year, Billy released an album of songs penned by Richard, titled 'Billy Dean Sings Richard Leigh,' which included covers of classics penned by Richard, 'Don't It Make My Brown Eyes Blue' and 'The Greatest Man I Never Knew.'

"There are no crooners in country music anymore, like Ray Price or Eddy Arnold," Billy laments to the Tallahassee Democrat. "My voice fits that crooning style and Richard Leigh writes that style of music ... and his songs fit my voice perfectly -- like a good pair of shoes."

It is Billy's desire to bring back the romance of that bygone era of crooners, singing love songs in a sophisticated supper club setting. On New Year's Eve, he performed a show he dubbed 'Love's A Small Cafe,' to a local club in his hometown of Tallahassee, Fla. Endeavoring to capture the classic, romantic style of Frank Sinatra -- with a dash of Hank Williams -- Billy put on a spiffy black suit and crooned romantic ballads with his big band ... as 'Hank Sinatra.'

"The music is real romantic and easy listening, but with a little country," Billy explains. "It's part Hank Williams and it's part Frank Sinatra. That's how we came up with the name, Hank Sinatra. The Moon has the feeling of an old showroom -- like an old Vegas showroom -- so I thought it would be a good place for this type of show. So we're going to test it out, see how it goes. It's also nice to be with a hometown crowd -- a forgiving crowd. At least, that's what I hope!"