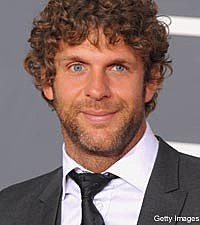 Billy Currington's latest single, 'That's How Country Boys Roll,' climbed to the top of both the Billboard and Mediabase/Country Aircheck charts this week, marking his fifth trip to No. 1 and his third consecutive chart-topper. The song is the follow up to Billy's previous No. 1 single, 'People Are Crazy,' both of which are from his current album, 'Little Bit of Everything.'

The Georgia native co-wrote the song with Dallas Davidson and Brett Jones, drawing inspiration from some of the shenanigans they got into when they were younger, such as "singin' in bars, soupin' their cars, just to see how fast they'll go." "I was with two other Georgia boys who I grew up [near], and they did all the same stuff," Billy tells The Boot. "So, we were talking about all that stuff. And that's how it came about. I think somebody said, 'That's how we roll,' or something like that, and that's how the title came about. We went from there."

Though the song was based on real life, he wasn't sure that it would be the right song for him. "The main thing was after I wrote it, do I record this song or not?" Billy explains. "It's not so much me at the very moment, but yeah, that's how I grew up -- hunting, fishing, dirt roads, you name it. All that stuff."

Billy is certainly glad now that he put the thoughts of not recording the tune aside, since it is now reigning over the country charts. He has a couple of weeks off from the road before he is set to roll into Austin, Texas on March 24.