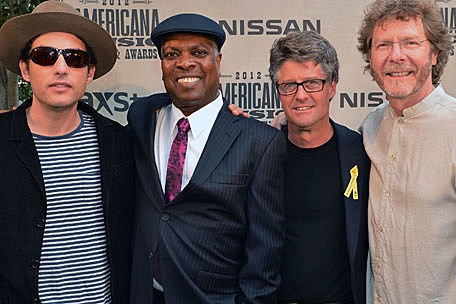 It was a night of numerous standing ovations for Americana artists at the Americana Music Awards last evening (Sept. 12). Held at Nashville's famed Ryman Auditorium, a venue steeped in multiple musical traditions, the celebration of music built from the roots of all American music genres saw multiple nods go artists as young as the Civil Wars and as ageless as Bonnie Raitt and Booker T Jones of Booker T and the MG's fame (who is pictured above with the Wallflowers' Jakob Dylan, Executive Director of the AMA, Jed Hilly, and fellow music legend Sam Bush).

The evening got underway with a tribute to Jones, with the house band led by Buddy Miller performing a rousing rendition of "Green Onions." Patterson Hood of Drive by Truckers presented Jones with the Lifetime Achievement Award for Instrumentalist -- recognizing the legendary musician, producer and artist for his significant contributions to the Stax Records and Memphis soul music sound.

"It means so much to me to receive this award, and it's especially good to receive it from Patterson," Jones said. "I am so honored to accept this award in such great company. It really touches me."

Bonnie Raitt presented the Lifetime Achievement Award for Songwriting to Richard Thompson, who is also a well-known guitarist. Among those who have recorded Thompson's songs are The Del McCoury Band, Robert Plant, Los Lobos, Elvis Costello, Blind Boys of Alabama, REM, Linda Ronstadt, Buddy & Julie Miller and Raitt herself. Later in the evening, she performed Thompson's song "1952 Vincent Black Lightning," which was a huge bluegrass hit for the Del McCoury Band.

Raitt in turn received her own award, the Lifetime Achievement for Performance, presented by John Hiatt. "It is my first time here, and I was glad I was able to find time out from my 80-city tour with Mavis Staples to come," Raitt said upon accepting her honor. "I am proud to have an umbrella like Americana. Who cares what kind of music it is, if it is great music. Tonight we are putting aside generations and genres to celebrate roots music."

One award that was especially poignant, and a favorite among attendees, was Album of the Year, which went to This One's For Him: A Tribute to Guy Clark, produced by Tamara Saviano and Shawn Camp. Both producers acknowledged that without the remarkable songs written by Clark, there would have been no tribute to offer. Tamara recounted for the audience Rodney Crowell's observation as he recorded the first song for the disc: "Let's give it a go and make Guy proud."

Jason Isbell and the 400 Unit took home Song of the Year honors for "Alabama Pines." Gillian Welch was named Artist of the Year, while The Civil Wars took home Duo/Group honors. Alabama Shakes were presented the Emerging Artist award and David Rawlings was named Musician of the Year.

Jim Lauderdale hosted this year's Americana awards, which also featured performances by Lee Ann Womack and Tom T. Hall. Guy Clark performed a heartwarming tune written about his wife, "My Favorite Picture of You." Others to take the stage included Justin Towenes Earle, Robert Ellis, The Mavericks, the Punch Brothers, Casey Chambers, Shane Nicholson, Hayes Carll, Cary Ann Hurst and the Carolina Chocolate Drops. There was also a special tribute to the late Levon Helm, who died earlier this year, led by his daughter Amy Helm.

The Americana Music Awards in an abridged version will air Nov. 10 on the "Austin City Limits" show on PBS.