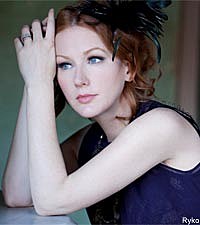 Allison Moorer was working on her album 'Crows' this past summer while husband Steve Earle was on tour, an unusual circumstance since the two try to travel together as much as possible. The singer recorded the new disc under another new situation in her life -- she was pregnant with the couple's first child, a boy who will be born in March. The singer swears her unborn child is already familiar with all the music on the new CD and that he moves around when he hears it.

While Allison declines to reveal the baby's name, she says the couple are thrilled and excited about his birth. They plan to take off a few months after he's born, leaving New York City for their home in Woodstock, New York, to give the family time to bond. In the meantime, Allison is doing as much as she can to promote 'Crows,' which hits stores today (Feb. 9). She's set to perform on the 'Late Show with David Letterman' on Wednesday (Feb. 10) and is excited about opening for Levon Helm on his Midnight Ramble in Woodstock on Feb. 13. Recorded in Nashville over a four-day period and produced by R.S. Field, 'Crows' is filled with reflective lyrics, tunes that allow Allison to showcase the beauty of her voice against the varied background of piano and guitar with jazz and blues overtones that pair easily with her country roots. Whether recalling her mother's love or imparting hope to the listener, the singer/songwriter presents a beautiful album that is poetry set to the motion of music.

The new project is a far cry from her earlier material, recorded for a major label in Nashville at a time when she had an Academy-Award-nominated song ('A Soft Place to Fall') in the Robert Redford film, 'The Horse Whisperer.' Allison says 'Crows' may be the truest musical statement she's ever recorded. Allison spoke to The Boot about the new album and some of the songs that are dearest to her.

The songs on this album are so descriptive, yet they leave much for the listener to fill in with their own experiences. How do you go about crafting those kind of lines?

There are all kinds of ways to write a song. I purposely wanted to be more abstract than before, more poetic and not literal, with the songs on this album. That is what imagery is about. I tend to communicate in more visual terms. I will use visual reference more than something that anyone can understand. I'm skewed that way; I'm not sure why. It was done on purpose with this album, but at the same time it wasn't. It's just where my head was at the time I wrote the songs. Because I wanted to write the melodies that are more open than I've done previously I wasn't interested in doing anything that was that straight forward.

The songs are also very introspective.

Life is art, art is life. Artists write about their own lives. That is what's handy. This record is about exploring some of the darker stuff, but at the same time finding light and hope in those things. It's a very grown-up, mature record because it does explore those things. It's not 'woe is me,' which is something that I find one has to get over. It's about fighting for happiness. I don't know anyone who is happy who doesn't work at it. What is important is to keep an intact self. That's one of the things I thought about during the time I was writing it.

Take us through the process of writing and recording the album. Did you write the 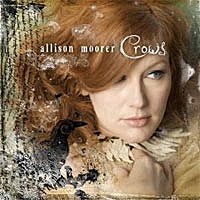 entire album in a set period of time or is it a combination of songs written during different periods?

I didn't have a record deal when I started writing them. My last label folded, but I knew it would be OK. I was just writing because it's what I do.

When Steve was in Nashville last August for a concert, he said he was happy you were able to join him there because you had been working on this album.

I wanted to take a break from the road. I didn't have a record, so it was not practical to go out with Steve when he was out this past year, but I did a few dates with him in August. It was great, because we had been apart for awhile, so it gave us a chance to catch up. It's very hard for us to be away from each other. He's finishing up his tour right now so he'll be home this week. There will be a couple of trips in February, and then he'll be here with be and we'll be waiting on the baby. We made commitment to each other to tour as much as we could. We both think the key to a good marriage is proximity. This tour has been harder; he's done so much by himself, but I had things I had to do. I had to get the record written, I had to get it made, plus I was pregnant, and I didn't feel like being out there. Not that the road is hard, but it can be draining. The next tour we'll do together.

You did the recording of this album in four days. That's really quick!

I had done so much work on the songs, so much pre-production. That's a great tool when it comes to songwriting, to be able to record straight into your laptop. I wrote all the songs except one, which R.S. [Field] wrote titled 'It's Gonna Feel Good (When It Stops Hurting).' It sounds like it's from the same batch of songs as the other ones, it's good musically and it's something a little different. So I had so much done, all the guitar parts, and I had figured out so much of it. We didn't have to do any guess work when it came to recording. I knew who I wanted as musicians, and I knew I wanted to use R.S. Field as producer. I've never recorded an album anywhere other than Nashville. For what I do, I go to the source. I think you find more musicians there who can do everything, than anywhere else in the world. I know who to call, because I lived there so long. I don't have to say, 'find me a drummer who can do this.' I wanted things that were familiar; I didn't want to have a situation where I had to learn to communicate with someone new. It's probably the most fun I've ever had making a record. It was relaxed. I knew what I wanted, and lo and behold, I got it on tape. It doesn't always work that way.

The title song, 'Crows,' is a little different. Where did that come from?

Steve and I have a place in Woodstock, and I was up there writing. It was back in the summer, and it had been raining. I looked out the window and the yard was full of crows. It kind of freaked me out, because people have told me when you see a crow, someone's gonna die. I decided instead of being ominous, these crows would be friendly and positive. This song started coming and that's how it turned out. In the room where I was writing, there is a painting by Tony Fitzpatrick, the artist who does Steve's albums. The painting is of a blackbird and there was a child in it. So in the middle of writing the song, I looked up and focused on that art piece, and thought, 'Oh my God, this is the message they're bringing me!' So there was Tony's art, influencing my art, and it all came together organically. It's my favorite track on the record. It reminds me of songs I wrote as a kid, innocent and childlike, and I dig that.

'Sorrow (Don't Come Around)' is an inspirational song. Where did it come from?

I wrote it after I found out I was pregnant. It comes from a real hopeful place. I had a miscarriage before, so I was really excited about being pregnant, but I was also frightened. It's probably one of the most hopeful songs I've ever written.

Where do phrases like 'this side of gone' come from?

I'm not gonna give away where I got that phrase. Sometimes you have to have your antennae up. Sometimes you pass someone and you hear something. That's part of my job, to see and to listen. That's the only way you're ever going to reflect.

Is it hard to write songs that are very personal and put them out there for people to hear?

None of these songs were born out of thin air. They are all from direct experiences and they are all very personal. It's probably the most personal record I've ever written. I don't find it hard; I find it the only way to do it. If you're not doing that, then why are you doing it all?