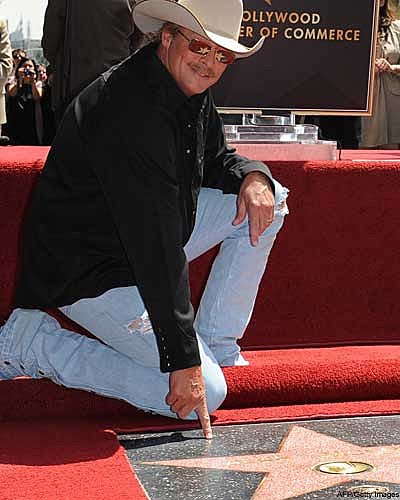 Before a crowd of a few hundred fans, Alan Jackson became the 2,045th recipient of a Star on the Hollywood Walk of Fame on Friday (April 16), and in true Jackson fashion, the ceremony was low key.

Unlike some such celebrations where celebrity after celebrity heralds the latest recipient to receive their own slab of immortality on Hollywood Blvd., Alan, who has sold more than 50 million albums since signing with Arista Nashville in 1989, kept the hype to a minimum. Los Angeles deejay Shawn Paar delivered a few remarks of his own before reading congratulatory notes from, among others, Don Henley, Keith Urban, Randy Travis, Carrie Underwood (whose first concert was a Jackson show), former Florida governor Jeb Bush and Brad Paisley, who commented, "Not since Jed Clampett rolled into Beverly Hills has a hillbilly left such a mark on Tinsel Town."

Alan, who seemed characteristically slightly ill at ease with all the attention, made his comments short and sweet after he took the podium, barely surpassing the two-minute mark: "I've been doing this for 20 years," he said. "I've had so many hits on the radio; I can't even remember them all. I've played every state ... and parts of the world. I've done so many things and enjoyed so much, I can't remember all of it. It's overwhelming, I've played for three presidents in the White House, and I've played some of the worst bars you've ever seen. And I don't know any place else in the world where a boy from Georgia can follow his dream to Nashville, Tennessee and then end up here on this Hollywood Walk of Fame. It's been an amazing ride. I feel humbled and proud ... I'm going to do my best to keep trying to make good music and keep that standard up."

After unveiling his star, which is in front of the new Hard Rock Café, Alan was joined for photos by his wife, Denise, and their three daughters. His concrete neighbors include singer Wayne Newton and athlete-turned-actor Buster Crabbe. 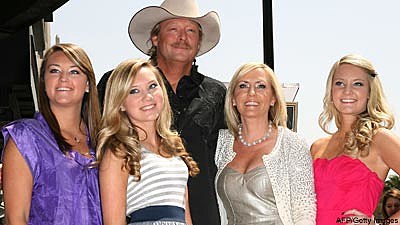 The Boot talked to Alan after the ceremony. We asked to pick the three highlights of his august career. "That would be tough," he said. "The first time playing the Grand Ole Opry is a very emotional moment ... And the first time you win a CMA Award. The CMA Award is the one Nashville puts the most emphasis on. It's hard not to include this thing today because it's a whole different category almost. It's something you never expect and you can't duplicate it. "

The recipient of more than 100 awards, Alan said he liked the idea of receiving one that he didn't take home with him. "It's not just a country music thing or the Grammys or anything. I think it's more an honor for your whole career and the impact you've made in the world with your music," he said. "It's something that's going to be here forever. It's not like one I put on the shelf at home. It's out here for everyone else to enjoy."

Since he brought up playing some of the worst bars in the world, we asked Alan to recall the most horrible place he'd played. He laughed as he recalled a gig a long, long time ago as he was just getting his start. "I don't remember the name of it. It was a truck stop lounge somewhere in Virginia," he said. "I just remember we got there late one night and we checked in and the first thing I saw when I got there was a dead rat floating in the swimming pool and it was worse we got inside."