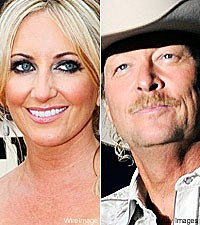 Alan Jackson and Lee Ann Womack have made it official! After trying for years, the two superstars finally recorded a duet together for Alan's upcoming album, 'Freight Train.'

So, how did he finally get Lee Ann to record with him? "I had to pay her a bunch of money," Alan jokes to The Boot. "I've been trying for years to get her to [record with me] ... I've just loved her since that first album she had, and when she got so hot with the 'I Hope You Dance' song, I tried to get her to sing with me. [I] asked her to sing on a duet back then, but she turned me down. It broke my heart. She was too snooty at that time because she was so hot. So, I got over it. We're still good friends. I tease her about that all the time about passing on me. But it was probably good that [she] did, because this was the perfect time and the song."

After hearing what Alan said about her, the Texas native sets the record straight. "He doesn't tell that right," Lee Ann tells The Boot. "He makes it sound like he asked me and I said, 'No, I don't want to sing with you.' Now that's not true, of course, because he's one of the greatest voices in country music and I'm a huge fan ... 10 years ago, with the politics in this business, it has to be the right time, it has to be the right song,"

The two blended their voices on the late Vern Gosdin's 1977 Top 10 hit, 'Till the End,' and it is one of Alan's favorite songs. "He was one of the best singers of all time," explains the tall Georgian. "And when he passed away [last year], I just felt with this album, I just wanted to do a tribute song for Vern, and that song 'Till the End' was one I've had in the back of my mind since before I ever came to Nashville. I've loved the song, and always thought it would make a great duet with somebody. So, it just worked out perfect. I got to do the thing for Vern and do that song and sing with Lee Ann. I couldn't ask for anything more than that. She sounds so good it makes me sound bad on there."

Lee Ann couldn't be happier with the outcome. "I've been dying to sing with him,' exclaims Lee Ann. "I love our voices together. So, I'm really thrilled with this duet that we have ... I don't know if I should or not, but I just feel sort of validated that somebody like Alan Jackson would say, 'Hey, would you sing this with me?' So, it was a big deal for me. And I'm really proud of that song."

Alan and Lee Ann previously worked together when she sang backup on his duet with George Strait, 'Murder on Music Row' in 2000.

The pair's duet is featured on Alan's new album, 'Freight Train,' which barrels down the tracks on March 30.