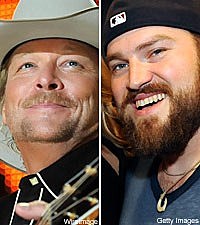 Artists in Nashville have classic stories of passing on a song that went on to become a hit for someone else. Alan Jackson has the most recent tale, as he regretfully admits turning down the opportunity to record the Zac Brown Band's song, 'Chicken Fried.'

Alan remembers that his producer, Keith Stegall, played him 'Chicken Fried' before Zac and his bandmates had a record deal. "I liked the song," Alan says, "But I told him, 'Man, I just had a song about cornbread and chicken, and I had a song about bologna. Every album I've got has these songs about food, so I just don't think I want to do one about chicken fried right now.' In retrospect I should have done it."

Zac admits he would have been thrilled if Alan had recorded the song. "He's a legend," Zac says of Alan. "He's welcome to any song I have."

The admiration is mutual. Fans might be a bit surprised to hear that Alan, who is considered by many to carry the torch for traditional country music, is a big fan of the somewhat non-traditional Zac Brown Band.

"I love those guys, they're the real deal," Alan says of the 'Chicken Fried' band. "They're players and writers and musicians. I'm glad that song worked good for them and became their first hit."