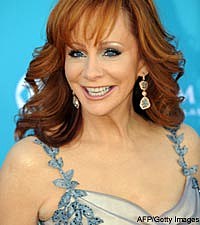 Nashville's hottest stars walked the orange carpet at the 45th Annual Academy of Country Music Awards in Las Vegas Sunday night (April 18). Great American Country (GAC) was there to bring viewers up close and personal with the stars as they made their way into the MGM Grand Arena. Here are some of the orange carpet highlights!

Reba McEntire on ACM preparation: "It just took about six hours [to get ready for tonight], but we're here! [laughs] We had to be working on the clothes about six months early, and then start writing on the script about three weeks ago, so we've got it all together and ready for the show!"

Blake Shelton on already being an ACM winner before the telecast started, for Vocal Event of the Year for 'Hillbilly Bone' featuring Trace Adkins: "I can't tell you how cocky I feel right now and how confident [I feel] ... how walking up and down this carpet that everyone I'm looking at -- at this point -- are losers. We've already won. I haven't really thought about the performance ... I haven't been nervous just because screw it! We already won!"

Trace Adkins on performing 'Hillbilly Bone' on the awards show with Blake Shelton: "Our relationship's on the rocks, really. We've had to rehearse together three times this week. We've never been together that much in that short period of time. It was really strange. It's really strained our relationship. I don't know if we're going to make it through this [performance]."

Miranda Lambert on performing with John John Fogerty: "I told my band today to be calm when we were rehearsing, but I totally lost it. I was like John Fogerty's here! We were biting our nails and were so nervous. It's going to be awesome!"

Carrie Underwood on the thought of making history as first female to win Entertainer of the Year twice: "I'm trying not to think about that too much. I mean that would be absolutely wonderful, but whatever happens happens. I'm just blessed to be here. God's blessed us all, and that's all we can be happy about. It's been a good year."

Brooks & Dunn's Kix Brooks on performing their last time on the ACM's as a duo and having the fans pick the song: "It's fun. We kind of resigned ourselves that we wouldn't be performing tonight. We don't really have a single out so we thought we'd let someone else do it. Then they came to us with that idea. We said if [the fans] want to hear something then let them pick!"

Gloriana's Cheyenne Kimball on tourmate Taylor Swift's nomination for Entertainer of the Year: "She definitely deserves it. She's put on an amazing show for the past year and a half. We're totally rooting for her. We saw her this morning. She's a little nervous, but we told her she's got it in the bag. We are totally supporting her."

Lady Antebellum's Dave Haywood on the pressure of being the most nominated artists of the night: "We're focusing on our performance tonight. That gets us a littler nervous, but we're going to have fun. If we can't have fun at this point in our career then we're not doing something right. We feel very blessed to be here."

Montgomery Gentry's Troy Gentry on receiving The Home Depot Humanitarian Award honors: "It's a little embarrassing for us. We feel like we're being put in the spotlight. There are are so many great artists in this format that do so many great things for so many people throughout the year. To kind of be spotlighted is very humbling and very much an honor, but kind of embarrassing at the same time."

LeAnn Rimes on presenting Montgomery Gentry with the Humanitarian Award: "I get to give good news [tonight]. I don't have to present an award where I have to give anybody bad news tonight that they didn't win! I get to pass down the award to Montgomery Gentry."

Tim McGraw on his ACM performance: "I'll be performing [my new single] 'Still.' This will be the first time I've performed it on TV. That will be cool ... cool for me, anyway. Don't know if it will be for anyone else!"

Taylor Swift on her nomination for Entertainer of the Year: "This is my very first Entertainer of the Year nomination for the ACMs. I'm so excited. The fact that it's a fan-voted award just really means a lot. It's going to be a really, really fun night regardless [if I win that award] because I've watched the rehearsals, and there are going to be some really cool performances. I'm just so excited to be nominated in the Entertainer category. That's never happened to me before. It's really, really fun."

Chris Young on his winnings on the casino floors: "I'm up. I actually won $1,500 last night. I sat down at a slot machine and won $1,000, and then won about $500 on Roulette. So I'm a happy man right now! I'm sure I will end up buying drinks for some people here tonight!"

Justin Moore on being a good boy in Vegas ... so far: "I've been good. My wife would be proud. I left her at home with our baby because she's two-months-old. I've been good ... I ain't lost any money or won any money yet. I don't feel like it's over until you do one of the two, so we'll see!"