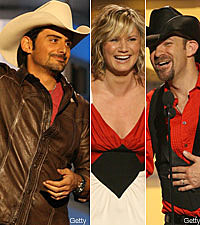 Nashville invaded Sin City on Sunday for the 43rd Annual Academy of Country Music Awards. The ACM honored Kenny Chesney for the fourth year in a row as its Entertainer of the Year. Sugarland nabbed both Song and Single of the Year for 'Stay.' Brad Paisley also won two awards: Top Male Vocalist and Video of the Year for 'Online.' Carrie Underwood took home Top Female Vocalist honors, while Rascal Flatts have the Top Vocal Group award for the seventh year in a row.

Garth Brooks adds another trophy to his mantle as the ACM's first-ever Crystal Milestone Award recipient. The living legend dazzled the crowd with a medley of some of his biggest hits on the show.

See the full list of ACM Award nominees, with the winners in *bold, after the jump.

Album of the Year

'Just Who I Am: Poets & Pirates,' Kenny Chesney

'If You're Going Through Hell,' Rodney Atkins

Single Record of the Year

Song of the Year

'Lost in This Moment'

Video of the Year

Vocal Event of the Year

'Because of You,' Reba McEntire Duet With Kelly Clarkson

'What You Give Away,' Vince Gill with Sheryl Crow