The Fourth of July holiday, also known as Independence Day, commemorates the adoption of the Declaration of Independence on July 4, 1776, declaring independence of the U.S. from Great Britain. For most, the holiday means fireworks, barbecues, parades and, of course, paying tribute to the red, white and blue. That includes some of your favorite country artists, who, along with revealing their plans for this year's celebration, also recall childhood memories, what the holiday means to them and their definition of patriotism. 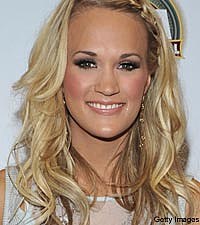 Carrie Underwood, who spent a year carrying the title of 'American Idol,' says she often thinks she's a living example of the American Dream. "America really is the land of opportunity," says the bride-to-be. "It's the only place in the world that I could try out for some show and win, amongst hundreds of thousands of people, and go on to do great things. It's the land of 'anything could happen.' The people in it are what makes it great." Carrie will be performing on Sunday (July 4) to wrap up the 11-day Summerfest event in Milwaukee, Wis.

Rascal Flatts' Jay DeMarcus recalls some of his past Independence Day celebrations. "I used to watch my Uncle Jimmy light firecrackers and then hold them until it got down to the end and toss them. You've got to throw it. You can't hold it that long. You've got to throw it sooner or later. I was about 12 years old probably and it went off in my hand and, oddly enough, my fingers were numb for a few minutes but it didn't do any damage."

Jay's cousin and fellow band member Gary LeVox says his Fourth was always an all-day affair. "Where Jay and I are from in Columbus, Ohio, they have a huge fireworks display called Red, White and Boom. You get there early, you sit out there and you're sunburned, and by the time the fireworks come, it's been such a long day. But it's some of the most amazing fireworks displays I've ever seen."

When Kenny Chesney recalls Independence Day celebrations of his youth, he remembers summer baseball games, followed by fireworks. "I was usually playing little-league baseball on the Fourth of July," explains the superstar. "I was big into sports, and the summertime in east Tennessee consisted of playing baseball. They had a big fireworks display after all the games, and I was usually trying to win the affection of some little girl over at the concession stand. [laughs] Things don't change very much."

Toby Keith has been accused of being a Republican, but in actuality, the Oklahoma native has been a Democrat all his life. He believes in the Constitution, the right to bear arms and helping out the less fortunate, so that puts him pretty much in the dead center. "My right to carry a gun is not political," says Toby. "I'm an American, and that is my right as an American, just like it's my right to vote and do anything. Do I care if gay people get married? I could[n't] care less. It doesn't bother me one bit ... I don't see things left-right. I see them right-wrong." 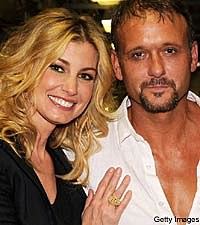 Tim McGraw and Faith Hill are big supporters of the men and women of the military, and Faith has a message for those family members who are left behind. She says, "Words of encouragement to the parents of the sons and daughters in Iraq just to know they're not forgotten. I mean, we pray about them daily, think about them daily, they are not forgotten. And the people who are left behind, who stay home to keep it all together. That's an extraordinary job and task."

Martina McBride released her hit 'Independence Day' in 1994, and it has over the years become one of her signature songs." "I feel so blessed that I got to record that song, because it's just really, really special, and it's so well-written. I mean, it's the kind of song that if you write out the words on a piece of paper without the music, it's a poem ... it's just something I'm really proud of. We all hope that the song that everybody really, really likes and remembers you for is something you can be proud of, and so that's that for me, and I love it."

One of Trace Adkins' childhood Fourth of July celebrations got out of hand. "I set the pasture on fire behind the house," he laughs. "I shot a bottle rocket out the backyard, and it landed in the pasture way back. And we just kept shooting bottle rockets and then happened to notice that the whole pasture was on fire. It was real dry. I was, like, 14. I'll never forget that." Trace is scheduled to headline Nashville's Let Freedom Sing concert, a free show taking place downtown on the Riverfront stage. Julianne Hough is also set to perform.

Reba McEntire and Darius Rucker will be performing at the 30th annual 'A Capitol Fourth.' The special will be broadcast live from the West Lawn of the U.S. Capitol on PBS from 8:00 PM to 9:30 PM ET. Reba will also be honored with the National Artistic Achievement Award for her lifetime of musical contributions.

Montgomery Gentry's Eddie Montgomery and Troy Gentry, just like most boys, enjoyed playing with fireworks when they were younger. In fact, Eddie, while not necessarily admitting any guilt, says he "heard" about some kids who threw some M-80s in the boys' bathroom at school. "I remember one time I was with some friends of mine -- I was in the wrong place at the wrong time is what it was -- and we were in school and somebody threw a bunch of firecrackers and stuff in the boys' bathroom. Of course, they walked out and we all got caught because we ran right into the principal. But, thank God, I [only] heard about that. I wasn't really in on that." The duo will be blowing up the speakers when they take to the stage in Orange Beach, Ala. on Sunday.

Chris Young, the newly named Breakthrough Songwriter of the Year at the 22nd annual Music Row Magazine Awards, usually lives on the edge when it comes to fireworks and the Fourth of July. "I gotta have the stuff in the big tube that shoots up 800 feet and explodes, and ... I've got to have stuff that can really injure you."

Josh Turner says his father's family would compete among themselves for the best fireworks display. "All the individual families would kind of have a lot of competition with each other and they'd try to outdo each other and see who had the biggest and baddest fireworks," laughs Josh. "My daddy, I think, was the smartest one. He just went out and bought maybe $25 worth of fireworks and let everybody else put on the big show. So, he saved a lot of money."

Newcomer Easton Corbin enjoyed the Fourth of July when he was a kid. "I love my country. It's the best country in the world," he says. "I can remember being a kid and my uncle, he'd bring fireworks over to my grandma's. That was a big highlight for me and my cousins and stuff. We'd go out with him and set off fireworks." Easton is part of the lineup for the annual Red, White and Boom celebration in Lexington, Ky.

Craig Morgan, a former Army paratrooper, says America equals freedom. "On the Fourth of July, when the fireworks are going off and the flags are being flown, that's the one thing that I think of, is freedom, and how great this nation is and how fortunate we as a people are to celebrate that freedom. We have a huge group of people to thank for that, and that's the men and women of our armed forces, past and present."

New artist Chelsea Field, who just released her debut single 'Things I Should've Said,' is performing at Fort Campbell, Ky., home to the 101st Airborne, on the Fourth. "I just hope I don't get choked up when I'm singing," Chelsea tells The Boot. "I know a lot of their families are going to be there and they're just going to want to be spending time together, and have a great Fourth of July. If I can make it a little bit better Fourth for them, then I am so proud to be there."