The 44th Annual CMA Awards may be over, but the performances will stick with us for ... well, at least until next year. There were impressive vocals and explosive collaborations, foot-stompers and tear-jerkers, legends and new faces to entertain the audience of millions. Here's a rundown of all of the 2010 CMA Awards performances.

Carrie Underwood kicked off the night with 'Songs Like This' from her 'Play On' album. In her black peddle pushers, sparkly black and silver jacket and vibrant red high heels she pranced from her banjo player to upright bassist, before revealing her co-host Brad Paisley on electric guitar. Then Keith Urban joined the crew playing banjo for the remainder of the sassy, uptempo number.

As Brad and Carrie took the stage for their monologue, they held with the tradition of past years and threw in a few songs they wrote just for the CMAs. The first was set to the tune of the 'Beverly Hillbillies' theme, with words changed to joke about how the BP oil spill overshadowed the Nashville flood. That was followed by a version of 'I've Got a Tiger by the Tail' that would make Buck Owens proud, as they sang of allegedly adulterous athletes like Brett Favre and Tiger Woods. ("She caught Tiger with some tail ...")

Rascal Flatts launched into their current single 'Why Wait' as images of Las Vegas filled the background, including an oh-so-appropriate wedding chapel sign. Lead singer Gary LeVox thrilled fans by walking up to stands and shaking hands with the audience before ending the song by asking the crowd, 'Y'all wanna do something crazy?"

Blake Shelton was next, moving to the back of the arena to perform on a small circular stage in the midst of his adoring fans. He sang 'All About Tonight,' which couldn't fit the night more -- especially given his first-ever CMA Award for Top Male Vocalist. At one point he even interjected, "We're gonna get our swerve on, son. What ever the hell that means!"

Following her fiancé, Miranda Lambert introduced the world to 'That's the Way the World Goes 'Round,' a John Prine cover from her CMA Album of the Year-winning 'Revolution.' Still dressed in the black corset and silver fringe skirt she wore to accept Song of the Year for 'The House That Built Me,' Miranda jumped and spun around during her performance while silver streamers blew in the background.

'King' George Strait took the main stage in a classic black jacket with a white dress shirt and his signature cowboy hat. With his band just out of view, George sang his current single 'The Breath You Take.'

The Zac Brown Band found themselves in an old fashioned stage for their performance of 'As She's Walking Away.' Armed with throwback microphones and floor lights, the group impressed with their own signature smooth harmonies, made even more electric when Alan Jackson joined them on the third verse.

Footage from Kenny Chesney's 'The Boys of Fall' video welcomed the singer to the stage. In a heartfelt performance, he was backed throughout the song by video clips of various football teams.

In one of the most enchanting performances of the evening, Taylor Swift sat in a white ballgown at a piano for ''Back to December,' a song from her brand-new, million-selling 'Speak Now' album. As white fog engulfed the stage's old-timey street lamps, a full orchestra backed the 20-year-old singer. The magical moment really came when it started to snow, as Taylor really did take us back to December. 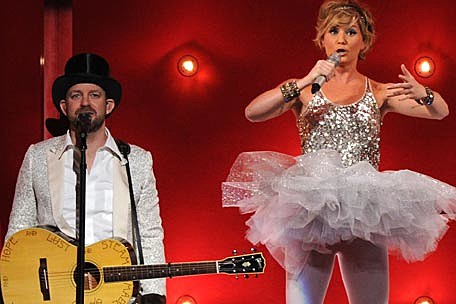 Sugarland get the creativity award for their 'Stuck Like Glue' performance. Lead singer Jennifer Nettles was dressed as a ballerina in a music box, as bandmate Kristian Bush revealed himself to be her operator. After Jen ditched the tutu to reveal tight white pants, she sparkled around the stage, working the crowd in true Sugarland style as she belted the single, complete with its reggae breakdown.

Keith Urban changed from his performance with Carrie into jeans and a yellow T-shirt for his new single, 'Put You in a Song.' Keith and his band were backed by cartoon images symbolizing the lyrics, such as Polaroid cameras and stereos.

Reba McEntire sang her version of Beyonce's 'If I Were a Boy' all alone on an empty stage, armed with just her voice and stunning black sparkly dress. The tune ended as the lights faded to black and the audience rose for a standing ovation.

Jason Aldean debuted his new duet with Kelly Clarkson, 'Don't You Wanna Stay,' backed by an orchestra on a level just above the singers' heads. The duo sang the love song to one another in what many are saying was the best vocal performance of the evening, while white lights flooded the stage.

Kid Rock sat the piano for his 'Born Free' before taking center stage, showing off his brown fringe jacket and blue jeans. As the lights alternated from red, white and blue, Kid rocked the stage and received a standing ovation for the patriotic number.

The second song debut of the night came from Brad Paisley, who stopped the room silent with the the first lyrics from his new tune, 'This Is Country Music': "you're not supposed to say the word cancer in a song." Images of legends past filled the background as Brad sang the ode to his beloved genre, ending with a hearty "God bless us, everyone!"

Lady Antebellum started their spine-tingling performance of 'Hello World' in the pitch black, as member Dave Heywood sat the piano, flanked by bandmates Charles Kelley and Hillary Scott on either side. Lights then revealed hundreds of tiny tea light candles as the trio belted the powerful tune.

The Band Perry took a small stage in the middle of the audience for a brief performance of 'If I Die Young' before introducing the CMA radio winners.

For her second performance of the night, Carrie made another wardrobe change, this time into a flowing purple gown for 'Mama's Song.' She stood alone on the stage, which was transformed into an elegant movie theater, showing the song's video on the silver screen.

Dierks Bentley gathered around the mic with his band for 'Up on the Ridge.' Fog filled the scene as Dierks prominently showcased each band member during the bluegrass-tinged number.

For the last performance of the night, Oscar winner Gwyneth Paltrow got into character for the title-track of her upcoming film 'Country Strong.' Vince Gill sang backup on the song and accompanied on electric guitar, with the scene of a country road and clouds behind them. It ended with the crowd rising to their feet to heartily welcome the actress to the format.