If you think today's country stars haven't paid their dues, you haven't met these performers. The Boot counts down 25 musicians who gave their blood, sweat and tears -- and the occasional body part -- to some pretty bad jobs on their way to the top. 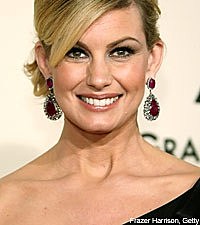 Hill -- then Faith Perry -- spent four months in Nashville before landing her first gig: a one-week stint selling T-shirts at Reba McEntire's booth at the 1987 Fan Fair. Hill's buddy Martina McBride paid her dues the same way. She was the lady behind the T-shirt table at Garth Brooks concerts in the early '90s.

Next
Filed Under: Faith Hill, FaithHill
Categories: Lists
Comments
Leave A Comment
Back To Top
Garth Brooks' 'Stand' on CMA Ent. of the Year 'Is Still the Same'