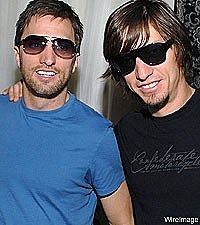 Over the past 12 years, The Warren Brothers, Brad and Brett, have not only made their mark in Nashville as performers and musicians, but also as top-flight songwriters. In recent years they've written tunes for Martina McBride ('Anyway,' 'How I Feel,' 'Wrong Baby Wrong'), Faith Hill ('The Lucky One,' 'Red Umbrella'), Tim McGraw ('If You're Reading This,' 'Blank Sheet of Paper'), and Dierks Bentley ('Feel That Fire').

It should come as no surprise, then, that they were asked to write the theme song to the new faith-based film, 'Letters to God,' which hit theaters last week. "It was kind of funny how it all came about," Brett Warren tells The Boot. "My mom had just told me, 'You need to write more songs that are spiritual based like 'Anyway.' I said, 'Mom, we're in Nashville where there are a lot of Christian bands. They mostly write all their own music.' It's not that I don't want to write more spiritual songs, but something like that is going to have to fall into my lap because we're country songwriters. We'll write with rock bands, but mostly country. I told my mom, 'If a faith-based thing falls in our lap, we'll do it.'

"Well, the next day," Brett continues, "my phone is sitting in my lap. I'm driving down the interstate, it rings and I pick it up. It was the producer of the first two films ['Facing the Giants,' 'Fireproof']. He asked me if I had ever heard of the movies, and I said yeah. He asked if Brad and I would like to write the theme song for the third film about a nine-year-old boy with cancer who writes letters to God. He asked if he could send me a script. I said, 'Sure, we'll give it a shot!'"

Together, Brett and Brad Warren came up with 'Dear Mr. God' which is now available for purchase through iTunes and included on the movie soundtrack for 'Letters to God.'

'Dear Mr. God' is not the first time Brett and Brad have appeared on a movie soundtrack. In 2000, they recorded 'That's the Beat of a Heart' -- which featured Sara Evans on vocals -- for the film 'Where the Heart Is.' Brett and Brad are currently out on the road with Tim McGraw where they play in his band as part of the Southern Voice tour.