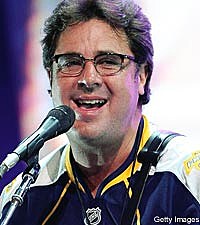 The invitation to play at Eric Clapton's Crossroads Guitar Festival in Chicago on June 26 might not have been a total surprise for Vince Gill, yet it is not one he takes lightly. Vince remembers the first time he was invited to participate, at the inaugural event, held at the Cotton Bowl in Dallas in June 2004. He says he'd been in a bit of a rut in his creative realm, and that phone call gave him renewed energy to write songs and record his Grammy-winning four-CD set, 'These Days.'

"At the time, I was questioning what I was doing and why things weren't connecting like they had at one point in my career," Vince recalls. "Then I got this call from Eric Clapton, who said, 'I'm only inviting people whose playing I admire and who I like.' I thought man, here's one of the greatest musicians that ever lived who sees me for what I've always wanted to be seen. He sees me as a musician, and it made me feel like a musician when he said that. It gave me inspiration, confidence, and the freedom to go play and not worry about what anyone thought or said, or liked or didn't like."

"The Crossroads Festival is the realization of a dream for me, to gather a group of amazingly talented musicians and have them play on one stage," Clapton says. "The Crossroads performers are all musicians I admire and respect."

The event features collaborations between the performers that are both planned and spontaneous, causing the planners of the festival to say fans will only see these special performances at this festival. Clapton's vision is to have his friends and peers be able to come out to perform together and have fun, all for the benefit of a good cause, The Crossroads Centre in Antigua. The facility is for the treatment, education and recovery of chemically dependent people.

Tickets for Crossroads Guitar Festival at Toyota Park in Chicago go on sale at 11:00 AM ET on Feb. 20 at all Ticketmaster outlets.