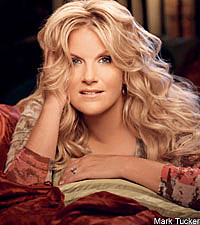 Trisha Yearwood is adding 'Cookbook Author' to her resume. She is set to release 'Georgia Cooking In an Oklahoma Kitchen' -- her personal guide to southern cooking -- on April 7. Together with her mother, Gwen, and sister, Beth Yearwood Bernard, Trisha pulled together over 120 recipes for the book.

Trisha's husband, Garth Brooks, has bragged about his sweetheart's cooking for ages and even wrote the forward to the cookbook. However, according to the anecdotes included in the instructional book, her culinary skills haven't always been mouth-watering. She told Dial-Global about one disastrous attempt at making fettuccini alfredo for her hubby.
"I must have put too much Parmesan cheese or something in the sauce, because by the time I got it all together, it was so thick you couldn't really get it around the fork . . . And it was so rich that I thought he was gonna fall asleep in his plate! He actually went and sat down on the couch and then he was just out. And hours later, he woke up, and he was like, 'What happened?' And I'm like, 'I don't know. I think you ate too much Fettuccini Alfredo.'"