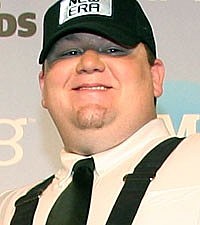 Trailer Choir's Big Vinny may soon need a new name. The singer-songwriter has reportedly signed on to join the cast of the upcoming season of NBC's hit reality competition show, 'The Biggest Loser.'

If true, Big Vinny (whose real name is Vincent Hickerson) would be one of 15 contestants fighting to lose the most weight and win the grand prize of $250,000. The musician comes in as one of the heaviest contestants, with a starting weight of more than 400 pounds.

Season 12 of 'The Biggest Loser' also brings a new trainer to the show. Replacing renowned fitness expert Jillian Michaels will be professional tennis player Anna Kournikova, who joins fellow trainer Bob Harper. The show is hosted by Alison Sweeney of 'Days of Our Lives' fame.

The new crop of 'Biggest Loser's began filming the show in June. Season 12 will premiere September 20 at 8:00 PM ET on NBC.