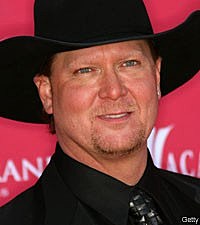 With the headlines buzzing about the national swine flu (H1N1) epidemic, Tracy Lawrence is offering details of his own recent health scare. Proving celebrities are not immune, Tracy candidly discusses his recent experience and the long road to full recovery.

"For five or six weeks, I was pretty sick," Tracy says in the Norman Transcript. "I had H1N1 and pneumonia. It hit me a little harder because I'm asthmatic." Forced to cancel several shows, he says the illness "knocked me down pretty hard."

Back on the road again, promoting his new album, 'The Rock,' Tracy admits he's disappointed by the lack of commercial success the album has received, and feels he knows who's to blame. "It's a lot of politics," says the singer. "They look for an excuse not to play a song. I thought ['The Rock'] was very mainstream country. I thought it was very appropriate."

With a successful career that includes eight No. 1 singles and as many Top 10 albums -- plus an impressive string of 19 consecutive Top 10 singles -- Tracy defends his music. "Sonically, as far as I'm concerned, it's not far removed from things I've recorded in the past," he says.

In addition to a packed tour schedule this fall, Tracy will also take time off for his annual Mission Possible Turkey Fry on Tuesday, Nov. 24, which will raise money for the Nashville Mission.