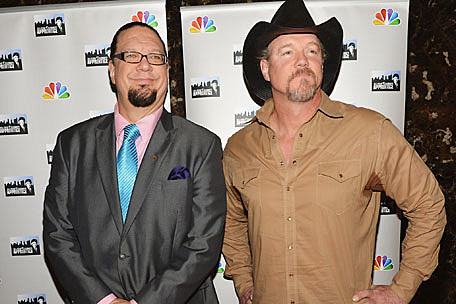 Trace Adkins didn't show much emotion upon being named the winner of 'All-Star Celebrity Apprentice,' but there's little doubt that those representing the American Red Cross were celebrating. By besting magician Penn Jillette, Adkins earned another $250,000 for the charity, bringing his total raised to over $1.5 million.

But first, he made the country singer sweat. Tebow didn't arrive until 44 minutes into the show. Donald Trump had said the man with the most money wouldn't necessarily win -- Adkins believed he'd made the best product as well. His Maple Macadamia Mash-Up didn't outsell Jillette's Vanilla & Chocolate Magic Swirtle, but the singer said it tasted better.

"Going into this last task, I think I delivered the best ice cream, I made the best commercial, I put on the best show, I brought in the biggest celebrities, and I raised the most money," the 'You're Gonna Miss This' singer said.

Other highlights from the finale included Jillette playing bass, backing up Adkins while the singer performed the title track from his new album, 'Love Will ...' The magician had nothing but kind words for Adkins, standing to embrace him as soon as Trump announced who was "hired."

"Trace looks wonderful onstage," he said (quote via Reality TV World). "There's energy there in music, you know, no one ever danced to Houdini. There could not be a harder opponent who has dignity, who has respect for other people, and Trace is all of those things."

After the show, Adkins admitted he'd love to do more acting and even more reality television, including 'The Voice.' "I would love to be on the show and go out there with Blake," he told E! "That would be lots of fun."