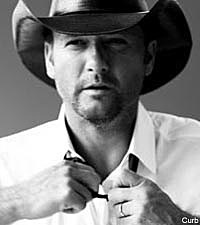 Tim McGraw joins the ranks of some of entertainment's hottest celebrities from TV, film and music in the upcoming PEOPLE issue, 'Sexiest Men Alive.'

Tim, who called the honor "pretty cool," according to ACC Top 40, admits he does have mixed emotions about the title. "I like it, I have to say. Except, I have to explain it all to my friends who are sitting back there," he says, referring to his band, the Dancehall Doctors. "They're not gonna let me live it down."

One other person who might not let him live it down is his wife, Faith Hill, who has appeared in 'PEOPLE's Most Beautiful' issue multiple times. "She'll pull that out on me when it's to her convenience," he reveals.

The magazine, which features movie star and 'Sexiest Man Alive' Johnny Depp on the cover, boasts several other musicians on the list, including American Idol alumni Adam Lambert and Chris Daughtry, as well as John Legend, Gavin Rossdale and Josh Groban.

The magazine hits newsstands this Friday.