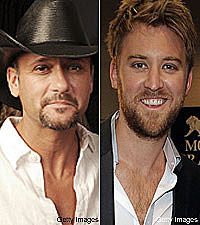 Tim McGraw recently gave Lady Antebellum's Charles Kelley the shirt off his back -- literally. It was part of a ritual Tim has every tour where he gives his tour mates one of his shirts, so Charles and Dave Haywood each received a selection from his closet. And as happy as he was to accept the gesture, Charles couldn't help but ponder just exactly how the ritual got its start.

"He has a tradition of giving a shirt to his opening act," Charles tells Country Aircheck. "I thought he was kidding at first, but his wardrobe person said that it's just something he does. One day he came out and brought Dave and me each a shirt of his. I wonder if it was a new artist and he was like, 'You have bad style. Here's one of my shirts.'"

One thing Charles and Tim have not shared while on tour is a game of basketball, also a favorite of Tim's. The 6-foot-5-inch tall Charles would definitely be a ringer on the court, but he admits it's just not his thing. "He made fun of me for not ever wanting to play basketball with him," says Charles. "He busted me pretty hard about it."

Charles is much more likely to be found with a golf club in his hand these days. He's featured on the upcoming TV special, 'Golf Magazine Presents: David Feherty's American Journey,' where he is interviewed on the golf course at the University of New Mexico. The special airs July 3 on CBS.