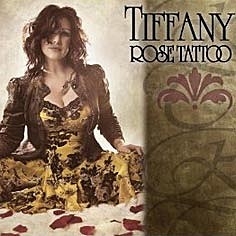 Pop star, Tiffany, best known for her '80s hits, 'I Think We're Alone Now' and 'Could've Been,' is back -- and back where she started. The 39-year-old began her musical career more than thirty years ago, performing country songs as a precocious pre-teen on the West Coast. Now, after enjoying a successful run as a pop star and releasing several independent albums, including a dance project and her critically-acclaimed CD, 'Just Me,' in 2007, the Tennessee resident returns to the genre she fell in love with as a child with her brand-new album, 'Rose Tattoo.'

"Being here in Nashville ... starting to live a life that I have always dreamed of in music, doing the shows I want to do and playing places I've always wanted to play is a stamp of approval," Tiffany tells The Boot. "There's a lot of talented people here and you don't just come into town and say 'Ta-da!' You have to earn your way, and I'm still doing that, but I love challenges and this is real for me. The more people that hear the music, the more I'm like, 'Yeah!'"

The married mother of one says she returned to her favorite format partly because of her family values. "I've been wanting to get back to country music," she explains. "For me, with country music, you can be a mom, you can be a wife and have your cake and eat it too, as far as family life. Country music is about loving people, it's about having a life and being proud of who you are. I always saw that when I was young -- people would roll up on buses and have their dogs and kids. I think sometimes [in pop], that's really frowned on a little as it's bigger than life and it's all about the celebrities. In country, they really look at the singer, where in the pop world, I wasn't really showing my talent. I was enjoying it, but it was more about being hip and cool and I'm not so sure I'm hip and cool anymore [laughs]. But I can sing and I love great music and I love the stories and the warmth in a country song."

The red-haired singer is still on the road, performing several shows each month, but adds that she's always eager to expand her career. "Right now, I'm doing it independently, which is great. I'm learning a lot," she acknowledges. "But I think everybody's dream is to find a label or somebody who can take them to the next level. I am very limited in what I can do. I can take it to the road or on the radio. I'm doing a video next month, so with my name people kind of go, 'Ohhh,' but it's really the music and the live performances that are turning their heads. I'm a big stickler of doing the work -- no matter what -- but being with a bigger label, there's a lot more people to help."

Tiffany will perform several shows across the country in the next few months, singing songs from her new album, including stops in Delaware, California and Illinois. Keep track of her schedule here.

Filed Under: tiffany
Categories: Country News, Exclusives
Comments
Leave A Comment
Back To Top
What Is Country Music? For Lee Brice, It's Personal