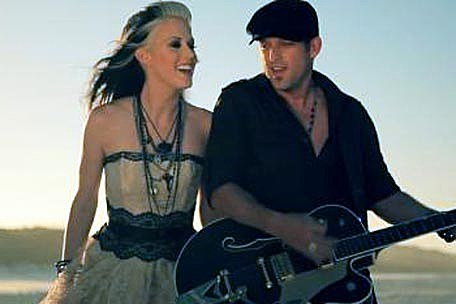 You're invited to Thompson Square! But before you get out your GPS, we should explain that Thompson Square isn't a place you can get to by car. Thompson Square is more a dream than a place, a dream where the jukebox is forever playing your songs and people are always having a good time. It's where you'll find husband and wife -- and country newcomers -- Keifer and Shawna Thompson.

Keifer, an Oklahoma-born rocker who counts Bruce Springsteen as his biggest musical inspiration, moved to Nashville in 1996. Unbeknownst to him, that very same week, Shawna arrived in Music City from Chatom, Alabama. Before the week was out, the two met in a singing competition that changed their lives forever. Even after they married 11 years ago, the couple continued to pursue music individually. It wasn't until six years ago they decided to team up as a duo. Signed by Stoney Creek Records last December, the their tunes include the provocatively-titled 'Let's Fight' and 'Are You Gonna Kiss Me or Not.'

The Boot caught up with Thompson Square in Nashville recently to talk about the music that inspires them, how they balance marriage and music, and a wild encounter with an unsuspecting woman in a parking lot.

You were both pursuing careers as solo artists at first. How did you decide to become a duo?

Shawna: We sat down and discussed it and said, "Do you want to keep doing the individual thing?" -- which we were both OK with -- "or do you want to be together all the time and enjoy making music together?"

Keifer: The weird thing about our relationship is that outside music, we do enjoy being together all the time, and we're best friends on top of everything else. It was one of those things where our marriage came first, and then we thought, "How can we make this the best that it can be? We want to do music ... how do we incorporate it, too?" When we asked that question, it just became blatantly obvious. We had had jobs together before, bartending, and now we've been touring together with other artists. It's a really weird and special situation that I don't think most people can do. We hear, "How in the world do you stand to spend that much time together?" We're by no means perfect. We definitely know how to throw down, but we have to get over it quick, because you don't want your whole band and everyone around you to be in misery.

Shawna, you're generally the realist, and Keifer, you're more the guy with your head in the clouds. How do you approach your music and career with those different mentalities?

Keifer: The way I've done everything in my life. A long time ago I just figured out that I didn't want to have any regrets. If there was ever anything, as far as going to college, or singing for the first time in front of an audience, even if I'm about to pee my pants, scared on the side of the stage, I just force myself to take that first step into the middle of the situation. I've never been scared to do anything. It's the same thing with music. A lot of times when I write, I kind of get out there a little bit because it's what I want to do. That's just kind of how I approach everything -- motorcycles, and just ... craziness. Life in the fast lane. If I could afford it, it would be faster! [laughs]

Shawna: I have no idea how to answer that!

Keifer: I'll answer for her!

Shawna: OK, you do that!

Keifer: Shawna is very, very conservative. She likes her comfort zones. She doesn't like to be pushed out of it, and she gets mad at me if I push her out of it. To a certain extent, when I have forced the situation, it has usually worked out pretty well so far. We're pretty polar opposites when it comes to that. She's very conservative, and I'm not at all.

When you were finally able to begin recording, what was it like to be in the studio after so many years working toward that?

Keifer: I just couldn't wait to get into the studio. We've been doing it for so long. I could live in the studio.

Keifer: If I could sing, ride my motorcycle, and record, I'd call it a day. I really would. We were just in the studio for a really long day, from like 10 [AM] until 10 [PM] and it was nothing.

Is being in the studio more comfortable than being on stage?

Shawna: For me, yes, it's more comfortable than being on stage.

Keifer: For me, they're two different things and you can't even compare them. On stage, there's the anxiety of performing for people and trying to get them to like you and entertain them, so you have that pressure.

Shawna: In the studio, it's like a big science experiment; you go in there and play around ...

Keifer: You go in there and keep pouring chemicals until it sounds good! [laughs]

How would you describe your sound?

Shawna: That is always the hardest thing to answer ... Shawn has a good answer for that.

[Shawn Pennington, the duo's manager and the one who discovered them, chimes in]

Shawn: It's the coolness of Springsteen, with the commercial viability of Sugarland, and with Johnny [Cash] and June [Carter Cash] in the middle of it.

Keifer: It's still country, it's just more country-rock. We don't want to be a boring married couple.You know how you see movies where there's a married couple in a restaurant, and they're not talking to each other, and it's just boring and worn-out? Hollywood likes to paint people married as being boring and drab, and it's not always like that. We just want to make sure we display that marriage doesn't have to mean the end of having fun. We've been married for 11 years, and we still ...

Shawna: I tell him all the time that even though we're married, I don't feel married. I feel like we're still dating.

Keifer: It's still fun. That's what we want our music to convey, that you don't just have to sing, "I love you, you love me." We just want to go out there and rock people's faces off, if we can.

What was it like the first time you heard yourselves of the radio?

Shawna: Well, there's a video on YouTube that shows it all! We were in Spokane, Wash., in the parking lot of Guitar Center. [The song 'Let's Fight'] came on, and we were sitting there trying to take it all in, listening to it blast out of the car speakers, and Keifer notices this woman across the parking lot, just sitting there in her car. He looks at me and our radio rep, and he said, "I want to go tell that lady to turn her radio on so she can hear us." And he's sitting there, rocking back and forth, and you can see his wheels turning like he wants to get out of the car so bad and go tell her ...

Keifer: Again, I had a little fear, and I opened the door ...

Shawna: So finally, he jumps out of the car and goes over to the lady and goes, "Hey, turn your radio on to such-and-such..." I know the lady had to think he was out of his mind, but she did it. She turned on the radio station, and he was like, "That's me on the radio!"

Keifer: What was funny, she was a singer-songwriter from Spokane, and her last name was Thompson!

Shawna: I was surprised she didn't pull a gun out at this crazy man walking up to her car!

How did you come to write 'Let's Fight'?

What has been the biggest thrill for you as artists so far?

Shawna: Probably opening up for Brooks & Dunn as Thompson Square -- going out there and doing our thing for 16,000 people. That was in Bristow, Va. On their farewell tour, a historic tour, to go out there and be able to do that, that was incredible.

Keifer: Getting reports from people around the country that they've seen the video, or heard the single, all that is pretty cool.They're actually buying the single.

What kinds of things are you still dreaming about in terms of your career?

Keifer: For me, as a songwriter, when I moved here I wanted to hear someone else sing one of my songs. Have a hit on the radio with someone else singing one of my songs. Also, I'd like to have a hit on a song that we have written. So a No. 1 hit is still on my list. You're just continually scared of it all going away. I've talked to artists who are very successful, and there's always the fear of "what am I going to do if it all goes away tomorrow?" What we have to do is take the time, because it goes by so fast ... take a few minutes out of the day to look at what you've accomplished, see how many things you can check off your bucket list, and look at how many blessings you have. Take time to recap and realize that, "OK, we're good. If it all ends tomorrow, we did good." There's millions of people who didn't have that opportunity. That's kind of what keeps me in check, to be able to do that.

Who are some of your favorite artists of all time?

Who's the one person without whom you wouldn't be at this point in your career today?

Shawna: My dad. And my mom. But my dad, because he's a musician. He put a band together so I was able to sing. He actually built a small country music park down in Alabama where I'm from so that I would have a place to sing -- Southern Style Music Park. He and my mom sat in honky-tonks two or three nights a week so that I could sing, watching out for me. [laughs].

Keifer: My parents, since I've been little and played sports, have supported me 110 percent. They guided me and let me do what I wanted to do. It was just support, support, support, like crazy. There were times when my parents were the only people in the stands. Anything that happens good for us, they're the first people I call. They love that! Mom documents it, and they really are just as excited as we are. Every bit of it.