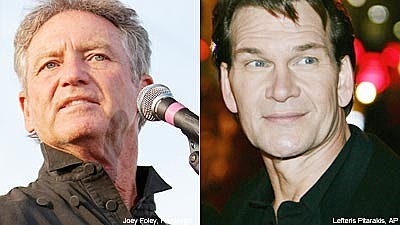 The Gatlin Brothers are among the celebrities who have paid public tribute to actor Patrick Swayze, who died Monday. Larry, Steve and Rudy Gatlin appeared on CNN's 'Larry King Live' via satellite Tuesday from Branson, Mo., and sang 'Brothers' -- a song that Larry co-wrote with the late actor/singer. They dedicated the song to Patrick's widow, Lisa, and the rest of his family.

Larry and Patrick wrote 'Brothers' in the late '80s and performed it together for the actor's 1989 film, 'Next of Kin.'

Patrick Swayze lost his lengthy battle with pancreatic cancer on Sept. 14. He was 57.