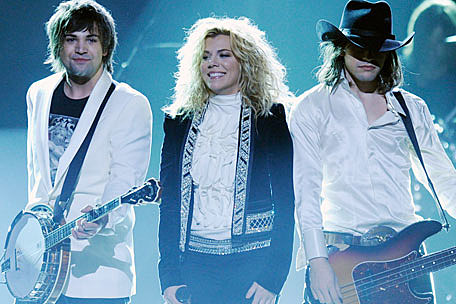 The Band Perry has another chart-topper! "Better Dig Two," is the sibling trio's fastest-rising single and the third to reach No. 1 on Billboard's Top Country Songs chart in their career. Having sold nearly one million copies since its release, "Dig" is the first taste of new music from the group's hotly-anticipated Republic Nashville album, which is due April 2.

Chely Wright, who announced last month that she is pregnant with twins, has shared her first baby photo via Twitter. The ultrasound shows "Baby A foot" (in the words of wife Lauren Blitzer-Wright, who posted the original tweet, which began with the words "Ultrasound heaven.") Along with the photo, Chely tweeted, "Isn't that the cutest thing ever?" The identical twins are due in July.

Toby Keith will be presented with an official certificate from the Office of the Governor next month, declaring the Oklahoma-born singer-songwriter an Honorary Texan. Other notable Honorary Texans include Bob Dylan, Russell Crowe and Bob Hope. As we previously reported, Toby will also participate in the Hall of Fame Awards Show during the Texas Heritage Songwriters' Association Homecoming Weekend, presenting a musical tribute to one of his heroes, Hall of Fame inductee Roger Miller. The event takes place Sunday, March 3, at ACL Live at the Moody Theater in Austin.

On Feb. 26, Sensibility Music will release the soundtrack to the documentary film, "A Place at the Table," featuring original songs and music by the Civil Wars and T Bone Burnett. The album features 14 songs, including the single "Lone Time Gone," (listen to it here). The label's net profits and 100 percent of the producer/artist royalties received from the soundtrack will be donated to the Participant Foundation, which exists to support programs that support a sustainable and peaceful world. Coinciding with the soundtrack's release, the full-length documentary will be released March 1 in theaters nationwide as well as on iTunes and On Demand.

Nickelodeon has revealed the nominees for the 2013 Kids' Choice Awards and Taylor Swift has earned mentions both in -- and outside -- of the music categories. Taylor is up for Favorite Female Singer, alongside Adele, Katy Perry and P!nk. She's also up for Favorite Song for "We Are Never Ever Getting Back Together." But Taylor also competes with an unlikely trio, Ben Stiller, Adam Sandler and Chris Rock, in the Favorite Voice From an Animated Movie category, for her role in "The Lorax." The 26th Annual Nickelodeon Kids' Choice Awards, hosted by actor Josh Duhamel, air live Saturday, March 23 at 8:00 PM on Nickelodeon. Voting begins Thursday, Feb. 14. [Nick.com]

On the eve of Valentine's Day, here's some romantic news: Robert Burck, the street performer known throughout the world as the Naked Cowboy, is getting married! Famous for playing country music in New York's Times Square on a regular basis, clad only in boots, hats, tighty-whiteys and a strategically-placed guitar, the entertainer, recording artist and author has made several trip to Nashville during CMA Music Festival and other events. Burck (or "Naked," if you're on a first-name basis with him, we're guessing), will marry Patricia Cruz on Friday (Feb. 15) at his manager's home in Los Angeles. [TMZ]