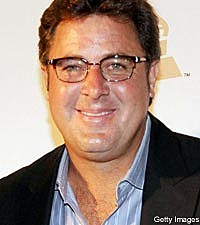 Vince Gill headlined a three-and-a-half hour flood-relief telethon on Nashville's local NBC affiliate, WSMV, with he and some of his celebrity friends, like fellow Nashville resident Keith Urban, helping to raise more than $1.7 million. More than 6,000 calls cane in from Tennessee, and other states as far away as California, on Thursday night, with donations to help those affected by the devastating floods that hit Middle Tennessee last weekend.

Vince, taking time out from planning daughter Jenny's wedding at his home this weekend, kicked off the benefit with a bang. He and his wife Amy Grant were so inspired by Reba McEntire's generous donation, they pitched in $100,000 of their own money to aid in the recovery efforts. Taylor Swift, who is out on the road on her Fearless tour, called in from Des Moines, Iowa, to the telethon, and it was announced that she had donated $500,000 to various charities across Middle Tennessee, while Charlie Daniels called to offer his support as well. Dierks Bentley tried to call in, but couldn't get through to donate because the lines were busy! He tweeted prior to his show in Boston, "Dang it! Even tried calling Alison Krauss on her cell phone. Love that so many people were calling."

Alison was one of many famous faces who manned the phone bank to take donations and also performed during the night's event. The others who did double duty included Keith ('Everybody' and 'I'm In'), Darius Rucker ('It Won't Be Like This for Long'), Dan Tyminski, Steve Wariner, Lorrie Morgan, Steven Curtis Chapman, Keb Mo, Bryan White, Lonestar ('What About Now'), Bo Bice, Julie Roberts (who lost everything in the flood), Buddy Jewell, Lee Roy Parnell, Billy Dean and Vince's wife, Amy. Vince accompanied all of the performers on acoustic guitar and piped in with background vocals.

Prior to his performance with a borrowed guitar, Keith, who most likely lost most of his guitars and musical equipment in the flood, expressed his deepest sympathies to the people who lost their lives and those who lost their livelihoods. Being a resident of Nashville for more than 18 years, Keith explained, "I couldn't believe it ... Our daughter was born here. My wife wanted to send out her prayers to everyone. She's out of town, but will be back tomorrow. We want to help as many people as we can." Keith was expected to begin work on his new album this past Monday, but was not able to because "all of our equipment is stored in a place downtown. Normally, I wouldn't have my really important stuff down there, but we took everything ... everything I own musically is gone, but my family is safe and my house is safe." When asked about seeing photos of the Grand Ole Opry House underwater, he said it was, "Chilling, a bit surreal, I think."

Lorrie Morgan, a Nashville native, paid tribute to Grand Ole Opry legend Jeannie Seely, who lost her entire home on the river near the Opryland area. She performed Jeannie's 'Don't Touch Me' with the Time Jumpers. Lorrie revealed that she had been working to save anything they could from her sister's farm. Leona lost her home, her car and baby pictures of her children. "I never thought I'd see anything like this," she said, before pleading with everyone to get a tetanus shot, because flood waters carry debris and bacteria.

Vince and his array of impressive friends wrapped up the telethon with an all-star performance of his hit, "Go Rest High on That Mountain."

Cleanup and repair is expected to cost more than $1 billion in the Nashville area alone. All proceeds from Working 4 You: Flood Relief with Vince Gill & Friends will benefit The Salvation Army, The Red Cross and The Second Harvest Food Bank, and the proceeds were expected to stay in the area.

More country artists are taking part in the relief efforts. CNN's Anderson Cooper broadcast his show live from Nashville on Thursday night and featured Tim McGraw, Faith Hill and Brad Paisley. Tim and Faith are planning a fund-raising event for next month, while Brad explained that President Barack Obama called him to check on the Grand Ole Opry and offer his support for Nashville.

GAC will hold a national telethon, Music City Keep on Playin': A Benefit for Flood Relief, from Nashville's Ryman Auditorium on Sunday, May 16 at 8:00 PM ET. Brad Paisley, Dierks Bentley, Lady Antebellum and Rodney Atkins will perform, with more talent to be added in the coming days.

Brad, Vince and Keith are among the many musicians and performers who lost their instruments, gear and stage production equipment at the SoundCheck rehearsal and storage warehouse. The owner said he is still in the process of assessing the damage and has arranged for artists to begin inspecting and loading out their equipment so the facility could be repaired. They are working with their sister company, Center Staging in Los Angeles and Austin, Texas to provide the more than 600 artists and musicians with as many resources as possible.