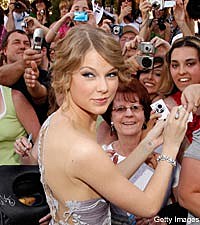 Taylor Swift is once again going above and beyond to show appreciation for her fans.

The country superstar has announced she'll spend a whopping 13 hours meeting fans and signing autographs during CMA Music Fest. "Taylor Swift's 13-Hour Meet & Greet" will be held at Nashville's Bridgestone Arena on June 13, from 8:00 AM - 9:00 PM CT. And you can bet fans will camp out overnight to be first in line.

"My favorite thing about CMA Music Fest has always been getting to spend time with the fans, so this year I wanted to figure out a way to meet as many of them as possible," Taylor says. "Thirteen is my lucky number, and the 13th is during Music Fest, so I think spending 13 hours that day with my fans is going to be amazing!"

The event is free and will also include an acoustic performance by Taylor in the afternoon, along with several other activities to keep those in the long line entertained.

Taylor has shown the same graciousness in past years at Music Fest, keeping her autograph line open for several hours until she's met every single fan in line.