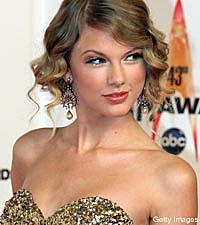 Taylor Swift comes in at No. 12 on Forbes' 100 most powerful celebrities list, released this week. The high ranking makes the 20-year-old superstar the top-rated country musician on this list, but not the youngest celeb. Taylor's buddy Miley Cyrus has that distinction, as the 17-year-old ranks just behind Taylor at No. 13.

Other youngsters on the list include the Jonas Brothers -- made up of Taylor's ex-boyfriend Joe, age 20, Miley's ex-boyfriend Nick, age 17, plus 22-year old Kevin. The pop princes rank No. 40 on Forbes' list.

The Forbes rankings are based on stars' pre-tax earnings and visibility on social and news media outlets, and includes musicians, actors and other celebrities. Taylor achieved her ranking based on her status as the "most-played" artist on the radio during 2009, her $54 million gross from concerts during the year, and record sales, including 3.2 million sales of her 'Fearless' album and 12 million downloads.

Other country music notables who made the list include Kenny Chesney, who came in at No. 54 (down from No. 34, last year's top country musician ranking), Rascal Flatts at No. 62, Toby Keith at No. 67 and Keith Urban at No. 76.