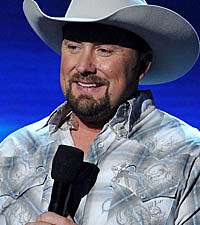 "X Factor" winner Tate Stevens will debut the video for his first single, "Holler if You're With Me," on the Feb. 10 Grammy Awards. The high-profile premiere is part of the grand prize the Missouri native won on the TV talent show, in addition to a $5 million recording contract with Syco Music/RCA Nashville. "Holler If You're With Me" will be available for download on iTunes beginning Tuesday, Feb. 5.

Faith Hill, Tim McGraw and Keith Urban have been added to the list of presenters at the Grammys. The night's country music star power will also include performances by Taylor Swift and Carrie Underwood, along with a Miranda Lambert-Dierks Bentley duet.

Kip Moore's romantic "Hey Pretty Girl" is the newly-released third single from his critically acclaimed Up All Night album. "My guitar player, Dave, he just had a baby. Watching the way he was so excited about that, it was such a different chapter in his life. I sat down and was writing that song for more of how I hope to feel one day -- when I'm ready for that time, this is how I want it to be. I'm not at that place now, but one day that's how I want to be," the Georgia native tells CountryMusicIsLove. Watch him perform the sweet song below.

Taylor Swift will be part of a CBS television special on how Whitney Houston's death, which happened just a day before last year's Grammy Awards, affected the live Grammy broadcast. "The Grammys Will Go On: A Death in the Family" will air on Feb. 9, featuring interviews with the "I Knew You Were Trouble" singer, LL Cool J, Jennifer Hudson and Bruce Springsteen. [The Tennessean]