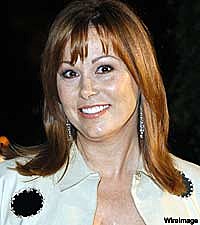 While many country artists are traveling from show to show in buses or private planes this summer, Suzy Bogguss has hit the road in an RV, and she's combining her cross-country tour with a family vacation.

In 1993, Suzy traveled to the upper reaches of the country charts with 'Outbound Plane,' and the John Hiatt-penned 'Drive South.' But throughout July, the singer, her husband Doug Crider, their 14-year-old son Ben and his friend Loren, along with their two dogs are driving west to picturesque locales including Albuquerque and Red River, New Mexico.
They're ultimately headed toward one of the country's most popular tourist destinations, Yellowstone National Park.

Along the way, they're documenting the journey on homemade video, which is available each day at
Suzy's website. They're also each blogging about their various adventures, which have included some typical summer activities such as bike riding and fishing, and some not so typical, like a scenic ride on the Rio Grande Railroad. Suzy also had the opportunity to perform with another purveyor of Western music and culture, her longtime friend Michael Martin Murphey.

Now if only she could only stop having disturbing dreams about bears!