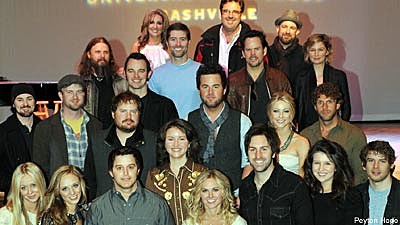 Universal Music Group Nashville gave a big -- very big -- "thank you" to country radio broadcasters on Wednesday, as the record label hosted a lunch and concert featuring almost every artist on its roster.

The show, held at Nashville's famed Ryman Auditorium, happened during the first day of the annual Country Radio Seminar, which has deejays and radio programmers from all over the country flocking to Music City for four days of seminars, showcases, concerts and parties. Universal invited those CRS participants to the intimate show, which included each artist playing one song of his or her choice acoustically.

Newcomer Easton Corbin kicked things off to a huge round of applause for his runaway hit debut single, 'A Little More Country Than That.' Fellow newbie Laura Bell Bundy -- a Tony-nominated Broadway veteran who is readying her debut country album -- dazzled the crowd next. Explaining that her CD will have a "shakin' side and an achin' side" -- with the "shakin'" side including her current single 'Giddy on Up,' the Kentucky native presented one of her "achin'" songs, 'Drop on By,' which beautifully showcased her powerful pipes. 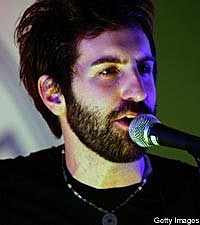 Next up was pop-gone-country artist Josh Kelley, who proved he belonged on that Ryman stage just as much as anyone else with one of his brand new songs, 'Gone Like That.' "A buddy of mine has a girl leave him every month for another man ... and then she comes right back," he explained of the inspiration behind the song's lyrics. Now that's a country song!

Coldwater Jane, a new duo featuring sisters Brandon Jane and Leah Crutchfield, were up next after a glowing introduction getting the crowd excited about their debut CD, on which they co-wrote every track. The blonde beauties performed their first single, 'Bring on the Love.' They were followed by another new act, Randy Montana, who sang on the Ryman stage for the very first time ... before his first single is even out. That single is called 'Ain't Much Left of Loving You,' and he performed it for an audibly impressed crowd, as one audience member yelled out, "Wow!" when Randy was done.

Mallary Hope, one of only two brand-new female artists to crack the Top 40 last year, followed Randy with a dazzling performance of 'Blossom in the Dust.' The angelic-voiced youngster then thanked the radio broadcasters in the audience for giving her a first charted hit, 'Love Lives On,' last year. "I cried like a baby all summer!" she confessed of her newfound success. 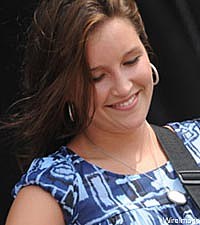 "This is the one artist y'all keep calling me about every day," Universal's announcer told the crowd before bringing Ashton Shepherd on stage. "My heart is beating a mile a minute!" Ashton announced before promising to deliver new music soon, but in the meantime entertaining with an old favorite -- her second single, 'Sounds So Good.'

Randy Rogers Band were up next, another UMG artist feverishly working on a new release. They gave a sneak preview of the upcoming project with one new song, 'Interstate,' that Randy is hoping will be a radio single. "This is one you haven't heard yet, but I hope you hear it so much that you hate it!" he joked.

Following RRB was a Golden Globe winner and Oscar nominee! Ryan Bingham, the raspy voiced musician who's getting critical acclaim for his role in 'Crazy Heart,' played his Academy Award-nominated song from the movie, 'The Weary Kind (Theme From Crazy Heart).' The crowd was so mesmerized by his haunting performance that you could hear a pin drop.

David Nail followed, absolutely blowing the crowd away with his soulful vocals on 'Turning Home.' The audience even interrupted his song with applause in the middle of the performance, after the Missouri native hit an impossibly high note. David, whose first album was scrapped but whose current album has had big success, thanked the audience for giving him a second chance.

Julianne Hough touched down in Nashville just in time for the show, as she'd been on the west coast shooting the film, 'Burlesque,' alongside Christina Aquilera and Cher. Wearing a white silk jumpsuit with sky-high heels, the "captain of the UMG dance squad" -- as the show host referred to her, proved her multi-talents with a sassy new song called 'Woman Like That,' which will likely be on Julianne's upcoming sophomore album.

Billy Currington was the first UMG act to turn back the clock. The platinum-selling singer explained that he wanted to sing a cover song that he used to play on his visits to radio stations, back in 2002 when he was just starting out. He then played the Bellamy Brothers' 1979 hit, 'You Ain't Just Whistlin' Dixie.' 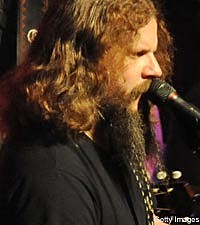 Jamey Johnson received the first standing ovation of the day after performing his poignant tune, 'That's Why I Write Songs.' Part spoken, part sung, the song pays tribute to the country songwriters this acclaimed songwriter has looked up to all his life.

Gary Allan took the stage with an announcement for anyone bound for Las Vegas for the Academy of Country Music Awards this May: "The day before the ACMs, we're having a pool party at the Mandalay Bay ... But bring your own beer. Things are getting tight at the label." As the crowd roared with laughter, the country-rocker launched into his huge hit, 'Right Where I Need to Be.'

"I've never had so many people open for me!" a joking Josh Turner said, as he took the stage after Gary. Explaining that he'd just flown into snowy Nashville after being in warm southern California, he began to tell a story about getting into a blazing-hot minivan after a recent show and hearing the provocative Nelly song, 'Hot in Herre.' "I wonder what Dr. Ralph Stanley would sound like singing that song," Josh pondered, then launching into his imitation of what that would sound like, adding a Stanley-esque twang as he sang the lyrics, "It's getting so hot, I'm gonna take my clothes off." And after all the jokes, Josh launched into his own song "to remind you of heat and summertime" -- his next single, 'All Over Me.'

Looking lovely in a belted white dress with shiny black high heels, Lee Ann Womack followed Josh with a spine-chilling performance of 'There Is a God,' the first single from an upcoming album due later this year. The enthralled audience erupted in applause after her first chorus, then putting their hands together again for some of the loudest cheers of the show as Lee Ann left the stage.

After the show's announcer went through a laundry list of accolades, including dozens of songs on the top of the charts, a humble Vince Gill responded by saying, "I've had a single die at every spot on the charts, too!" He then explained that whether or not he's having success at radio these days, he's still so blessed to be doing what he loves. "This is the greatest stretch of life, getting to play music. I'm gonna continue to do it regardless of the results!" And continuing he is. Vince reported that, for the first time, he's recording an entire album in his home studio. "I've never recorded barefooted in my life ... and I sound pretty good barefooted!" The living legend then sang a tearjerking, spiritual song loosely based on his brother's life, called 'Bread and Water,' which resulted in the second standing ovation of the show. 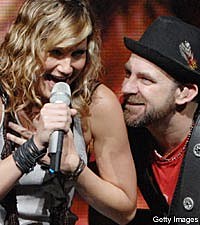 Capping off this marathon of monstrous talent was the Grammy-winning, platinum-selling, hit machine Sugarland. As the superstar country duo were the last act on the bill, lead singer Jennifer Nettles explained what she'd been thinking about backstage, as they listened to all of their labelmates' performances. "I was sitting there thinking, is there a subway under the Ryman? No, that's just Josh Turner warming up ... And Jamey Johnson is my dark side alter-ego. I wanna braid his beard and put little beads in it ... And then, we've gotta follow Vince Gill? ... No, what I'm really thinking is this is so much fun!" Sugarland then played the song they wrote for the Winter Olympics, 'Wide Open.' Jennifer had warned the crowd that she had a bit of a cold due to "it being winter and people are dirty!" But you surely couldn't tell it in her voice, as she hit every note flawlessly, while her beaming partner Kristian Bush jammed on the guitar.

A standing ovation for Sugarland capped off what was truly a star-studded treat for CRS-goers.