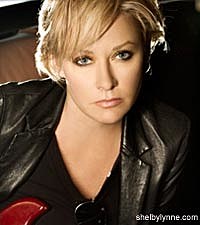 Shelby Lynne mimed a baseball catcher as she stood on the stage of an Alexandria, Virginia music club Tuesday night.

The audience -- already captivated by Shelby's self-effacing humor and powerful new music -- clapped and laughed appreciatively as she told how that stance is akin to how she grabs ideas for new songs.

"You never know where a song will come from," Shelby explained. "I'm always so grateful when they do."

As her new album 'Tears, Lies, and Alibis' proves, Shelby has had more than her share of powerful song ideas lately. In fact, the seasoned songwriter says she had enough tunes for two projects when she sat down to construct this latest album.

Although Shelby scored popular and critical kudos for her previous album, 'Just a Little Lovin'' – a tribute to Dusty Springfield, she was determined this CD would be all original material.

"The goal on this record was first of all to start writing my own songs again," Shelby tells The Boot. "I enjoyed the last album a lot ... but you can't do all covers or you turn into a karaoke machine. I was just ready to get out of my songwriting rut and start again."

For Shelby, nothing is more important than keeping her music as honest and raw as possible. That's why she opted to produce this album under her own newly minted label, Everso Records.

"The lyrics to a song are really important, and the meaning and the story that is going on," says Shelby. "In producing records, simplicity, in most cases, is the most attractive thing you can do to a song. If the song is strong and the vocals are good, everything is a warm pillow for it to lie on."

Not that all the songs on this latest album are sparsely textured.

Consider 'Rains Came,' – Shelby's ode to California storms – which was the opening number at her Alexandria concert.

"The rains came song is [fully] produced, it has a lot of instruments," she says. " I think that is fine as long as you can hear the lyrics and something's not grating on your nerves."

Dressed in jeans, a white short-sleeved sweater vest and black short-sleeved blouse, Shelby was accompanied by guitarist John Jackson and bass player Brian Harrison, who worked closely with Shelby on her latest album.

As she moved from songs including 'Alibi' to 'Something To Be Said' -- her ode to Airstream trailers – Shelby continually reached out to her audience, telling personal stories and calling for applause for the other guitar players' outstanding performances. One high point of the evening was the rendition of 'Life Is Bad,' which had the audience singing and clapping along especially to Jackson's true guitar wizardry.

"You are all a ball tonight," Shelby called to the audience at one point. "Y'all are the pick of the litter."

When Shelby then made a quick segue into a story about how much she misses her dogs while she's on the road, the audience couldn't have been more delighted. After all, it was evidence the personal, powerful stories from her songs are just an extension of the singer's honest, down-home personality.