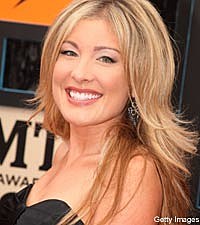 Sarah Buxton is glowing ... and so is her left hand.

When The Boot caught up with the vivacious songbird last week at a Nashville recording studio, she was bubbling with excitement, celebrating the upcoming release of her long-awaited debut album, due Feb. 23, and also celebrating the brand-new sparkler on her ring finger. Sarah got engaged over the holidays to musician Tom Bukovac, who has played guitar for a who's-who list of country stars, including Faith Hill, Dolly Parton, Keith Urban, Carrie Underwood and, of course, his future bride.

"It was a surprise," Sarah tells The Boot of the day Tom proposed. "I knew he'd gotten the ring, so I just knew if this guy is going to ask me to marry him, I'm going to know like a half hour before ... I'm just going to be able to tell, because he's so transparent. But he totally surprised me! He put it in an Advent calendar, where the candy goes, counting down to Christmas. I was so shocked when I found it, all I could do was just look at it and go, 'Oh my God! Oh my God!' And then I started crying."

Sarah explains that she underestimated her beau, not realizing how creative he'd be with the proposal. "He thought of that on his own, and he's so not romantic," she says with a laugh. "But he's gotten more thoughtful and sensitive ... He's really talented, sweet ... and hot!"

Sarah and Tom will tie the knot later this year. Much to their friends and family's delight, the couple scrubbed their plans to elope just shortly after they started dating.

"We were gonna run off and get married immediately, but I'm so glad we didn't do that!" Sarah explains. "We contemplated doing it within the first six months, but then all these dark shadows started appearing, as they do in relationships. You start seeing beyond what you thought that person is and you start seeing who the person really is ... and can you deal with that? So we went through that and came out stronger than we were in the beginning."

Sarah's self-titled debut album includes her hits 'Outside My Window,' 'Innocence' and 'Stupid Boy.' Pre-order it here, and be sure to come back to The Boot on Feb. 23 to read our full interview with Sarah.