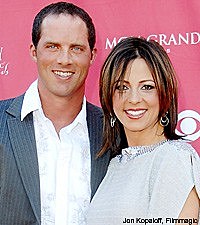 Sara Evans has married former University of Alabama quarterback Jay Barker. The two tied the knot Saturday in an outdoor ceremony on a farm in Franklin, Tenn.

The couple's combined brood of seven children served as attendants. Evans' 8-year-old son Avery walked his mom down the aisle, accompanied by famed songwriter Marcus Hummon singing the hit he wrote for Rascal Flatts, 'God Bless the Broken Road' -- a song that the couple says speaks to their relationship. Evans and Barker's first dance was to Chris Brown's 'With You.'

"It was really very elegant, but Sara wanted it to feel like you were at her house," friend and wedding planner Traci Phillips tells PEOPLE magazine.

Evans and Barker, who now hosts a sports radio show in Birmingham, Ala., met last fall through their minister. Each was going to him for divorce counseling. Evans went through a very public, messy split last year from first husband, Craig Schelske. Barker also ended his first marriage around the same time.

"He was our own personal matchmaker," Evans says of their minister, Joe Beam, who also performed the wedding ceremony. "I think God told Joe to get us together."