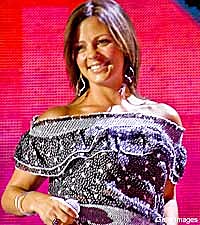 Sara Evans and her former nanny have settled a defamation suit and put an end to one aspect of a messy - and very public - divorce.

E! News reports that the $3 million suit, filed against Sara by Alison Clinton Lee and her husband Chris Lee in April 2007, was settled to the tune of $500,000.

The drama began in 2006, when Sara filed for divorce from Craig Schelske, her husband of 13 years, alleging, among other things, that Craig and Alison were having an affair.

In addition to being the former couple's nanny, Alison was also Sara's personal assistant and co-president of the singer's fan club. Sara served as matron of honor at Alison's July 2006 wedding to Chris Lee.

The original lawsuit alleged that stress over accusations of an affair had aggravated Alison's pre-existing eating disorder and forced her to seek additional medical treatment.

At the same time she filed for divorce, Sara also quit as a contestant on the third season of 'Dancing With the Stars.' She married former University of Alabama quarterback Jay Barker in June 2008.

Sara's ex-husband filed a $20 million lawsuit against her divorce attorneys for alleging slander and libel with regard to the allegations of adultery. That suit is still pending.