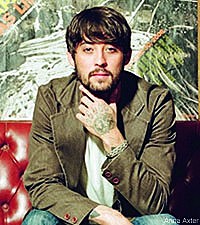 With the release of his sophomore album, 'Roadhouse Sun,' on June 2, gritty-voiced singer-songwriter Ryan Bingham may be sticking to his southern roots, but he's not just trying to be the next big country star.

"In some ways, I'd gotten burned out on the straight-ahead country scene," the 28-year-old Bingham says. "Because I wear a cowboy hat, people assume we're just this honky-tonk band, and we're not."

Bingham's last album, 2007's 'Mescalito,' was highly acclaimed for its union of country, folk, rock and blues, with a tone that sounds like he's been through it all. The CD's success garnered him appearances on the 'Tonight Show with Jay Leno', 'Late Night with Conan O'Brien' and 'Austin City Limits.'

'Roadhouse Sun,' produced by former Black Crowes guitarist Marc Ford and performed along with the Dead Horses -- Corby Schaub on guitar, Matt Smith on drums and Elijah Ford on bass -- features the similar sound that Bingham crafted with his first record, but aims to show his growth as a songwriter.

Bingham, who left home as a teenager due to family issues, is used to life on the road and certainly has a long list of tales to tell.

"I grew up poor, and I grew up angry about it," Bingham says of his past. "But at some point, you realize you can't just be pissed off -- you have to try to do something positive, and this record is my way of doing that."