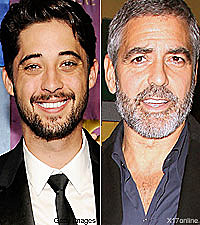 Ryan Bingham's most surreal moment in his improbable ride came celebrating his Golden Globe success at Los Angeles' celebrated Sunset Towers. Walking down the hallway during the party, he ran into George Clooney, who naturally plays a character named Ryan Bingham in 'Up in the Air.'

So Ryan Bingham had his first George Clooney moment.

"We were laughing about how Ryan Bingham is the name of his character," Ryan tells The Boot. "That was pretty strange. He had been getting some stick for that."

Only a few years ago, Ryan was spending more than the odd night in his truck as a struggling singer-songwriter. Now with the wild success of his song, 'The Weary Kind' from the 'Crazy Heart' soundtrack, he's working the award circuit and has a good chance of bringing home Oscar gold on Sunday.

Still, he has regrets -- that Clooney night, Ryan was at the upscale Sunset Towers instead of partying across the street at the Saddle Ranch bar, which features a mechanical bull.

"Hell no, I shouldn't have been there," the former rodeo bull rider admits about the Sunset Towers. "I should have gone across the street and gotten a little bull-riding competition going."

Ryan did a little better when he found out about his Academy Award nomination. When his friend woke him with the news, the singer acknowledged and then went back to bed. "I figured it was going to be a late night," he says. "I needed my sleep!"

This time he and his pals went to Chez Jays in Santa Monica, a suitably laid back bar near the beach. "We did some damage for sure. Sitting with a couple of buddies in the corner, having a few laughs about being nominated. I'm not even an actor!"

He's a pure singer for sure. But Ryan's heartbreaking song has caught the world's and Hollywood's attention. And it has 'Crazy Heart' star Jeff Bridges urging him to go into acting. "He said he'd help me out if I wanted to give it a shot," says Ryan. "He's one of the nicest guys on the planet."

All of this good fortune can lead to ruin for a soulful writer like Ryan. He's too happy to write a song like 'The Weary Kind.'

"Success is messing up all my plans. I am going to have to rethink my situation here," he laments. "I might have start writing children's music!"