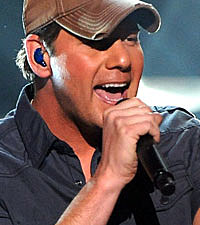 Rodney Atkins has enlisted a few famous friends to come out for a good cause.

The Tennessee native will host the Second Annual "Music City Gives Back" benefit in conjunction with the Nashville Convention & Visitors Bureau on Tuesday, June 5. In addition to the "He's Mine" singer, the lineup includes Clint Black, Thompson Square, Lee Brice, Josh Thompson, Jana Kramer, the Farm, Mallary Hope and the Willis Clan. While the show is free to the public, attendees will be able to make donations to the American Red Cross.

"Last year was such a great experience to close down Broadway and to raise money and awareness for the American Red Cross we decided to do it again," Rodney says.

"This is an organization that helps so many people in all of our communities and they need support not just when disaster strikes," he adds. "Looking forward to getting out there and working with Wrangler Western Wear and Cricket's Muve Music to raise awareness and party with everyone in Music City."

The benefit begins at 5:00 PM CT on June 5 at the outdoor stage on Broadway between 2nd and 4th Avenues.

If you're not in Nashville next week, you'll still be able to enjoy the show. Performances will be streaming here.