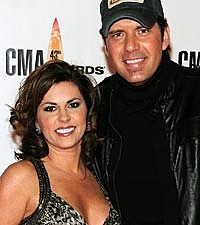 When Rodney Atkins filmed the video for his latest single, 'Farmer's Daughter,' he got a taste of authentic farm life in rural Franklin, Tenn., driving a tractor and bucking hay. He also got his real-life wife, Tammy Jo, to star in the video as the farmers daughter, whom Rodney -- a young farmhand, falls in love with and ends up marrying in the storyline.

A song about hot summer romance turning to true love, 'Farmer's Daughter' is the fastest climbing single in Rodney's career, selling more than 140,000 downloads on iTunes in just a few weeks. All combined, Rodney's previous No. 1 hits, 'If You're Going Through Hell,' 'These Are My People' and 'Cleaning This Gun' have sold nearly three-quarters of a million single downloads on iTunes, which is a sure indicator that Rodney will be breaking the million mark in no time, based on the early, sizzling sales of his newest single.

'Farmer's Daughter' is the fourth single from Rodney's third album, 'It's America.'

Rodney's real-life son, Elijah was featured in the 2006 video, 'Watching You,' playing the role of Rodney's son in the storyline.