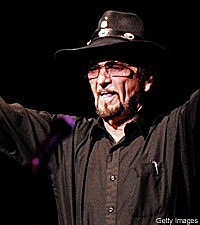 Paul English, who has played drums in Willie Nelson's band for almost half a century, recently suffered what is believed to be a "minor stroke," Willie's spokesperson Elaine Schock tells The Boot.

He "is being well taken care of," says Schock. "We expect him to be back on the road very shortly."

Paul first jammed with Willie in the mid-'50s and became his regular drummer a decade later. "I played my first gig with Willie -- and I'll play my last one with him," he told Modern Drummer magazine in a 2005 article.

Playing in Willie's band is an exercise in creativity because the iconic entertainer moves in various, often unexpected, musical directions.

"The first thing Willie told me when I joined the band was, 'don't count -- play with a feel,'" Paul told Modern Drummer.

Updates on Paul's condition will be posted at Willie's official website.

Willie, who recently celebrated his 77th birthday, is currently on tour, playing in New York on Thursday (May 6), with dates scheduled through Oct. 12 in Milwaukee.