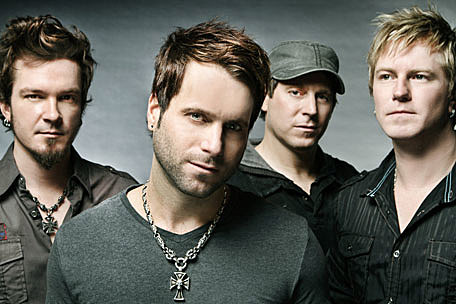 The guys of Parmalee certainly know how to throw a party. The country-rockers' debut single, "Musta Had a Good Time" was inspired by a monumental bash the bandmates went to, so they tried to recreate it for the song's video ... but ended up taking it far beyond their wildest memories.

"We shot the video at this big house near Music Row (in Nashville) with a huge swimming pool and big, crazy deck," says lead singer Matt Thomas. "There were a million things going on at once, from miniature horses running around, to stunt bikers jumping in the pool, to people dancing in a foam pit."

Miniature horses weren't the only four-legged co-stars. The "Musta Had a Good Time" video shoot also included a non-cooperative pig, a kissing frog, plus a cast of more than 70 extras, including professional stunt performers.

"It was pretty overwhelming. You couldn't look anywhere and not see something totally ridiculous," laughs Parmalee guitarist Josh McSwain. "The video shoot was only supposed to look like the party described in the song, but at some point the shoot actually became the party. We even got kicked out of the house we were shooting in!"

Directed by Wes Edwards, also the eyes behind videos by Jason Aldean and Thompson Square, the "Musta Had a Good Time" video is making its world premiere right here on The Boot. Watch below, then click here to see the band's Top 5 hilarious moments from the shoot.

"None of our friends back home will be surprised at what they see in the video," says Matt. "In fact, they'll be mad that they weren't in it! If I could only use three words to describe this video, they would be 'Yes. We. DID!'"