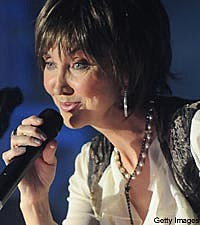 Pam Tillis' current concerts with Lorrie Morgan are giving her a chance to unveil a few new songs she's recently written -- and meet a few new fans, too. Taking a page from the book of her father Mel Tillis, Pam consistently schedules meet-and-greets and autograph sessions with fans. She always gets a kick out of the young men who flirt with her, even though she's happily married and not interested in their attentions.

"They mean it in the nicest way; it's a form of flattery," Pam tells KSKE Ski Country radio in Vail, Colo. "I do get a kick out of it when somebody young enough to be my son gets all flirty."

Even though she's logging plenty of hours on the road, Pam has spent time at various events in Nashville since the devastating floods. Having grown up in Nashville surrounded by the country community -- including her parents and their legendary friends such as Waylon Jennings, Roger Miller, Dolly Parton, and Kris Kristofferson, Pam feels a very real attachment to Music City and its residents. Yet, she says she's sometimes surprised by how the attitudes of some country stars have changed through the decades.

"I ran into a person [at a recent Nashville event] ... who is a big, big star right now and they weren't very nice," says Pam, noting the encounter still "sticks in my craw ... and I won't name names ... but I was thinking, 'I grew up around legends and all the legends that I knew were nice people.' I hope this person gets it together. Because Daddy taught me, it doesn't really matter how many gold or platinum records you have. People won't remember where you were on the charts. Decades from now they'll all remember whether you were a good person or not."

Pam also reveals to KSKE who the "girl" is in Brooks & Dunn's 'You Can't Take the Honky Tonk Out of the Girl,' which was written by her ex-husband, Bob DiPiero. To find out, listen to Pam's full interview here.

Pam is currently on tour with Lorrie, with her father Mel, and also playing solo dates. Her next is with Lorrie on July 12 in Beaver Creek, Colo. For details about Pam's concerts and a complete list of cities and dates, click here.