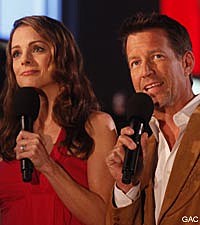 "It was two weeks ago today that Nashville and surrounding areas were hit with a devastating flood, the likes have which haven't been seen in a thousand years," said 'Desperate Housewives' actor and Nashville native James Denton, as he kicked off GAC's 'Music City: Keep on Playin'' flood relief telethon Sunday night.

"For two straight days, the skies opened up and poured nearly 20 inches of rain -- first the creeks rose, then the Cumberland, Harpeth and Stones Rivers out of their banks, reaching record levels," said James' co-host Kimberly Williams-Paisley, as devastating images of the flood-ravaged city flashed on the screen. "The floods caused an estimated $1.5 billion in damage, and most tragically, dozens of people lost their lives."

"The floods threatened to silence Music City," James continued, "but we here at the Ryman Auditorium are not gonna let that happen!" 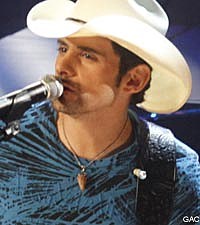 The audience at the historic Nashville venue took their show host's cue, with the whole house on their feet and cheering loudly as Brad Paisley kicked off the night's performances with his poignant tune, 'Welcome to the Future.'

After Brad's performance, cameras then panned to the phone banks, where several celebrities were taking calls all night and through the next morning. All of the money raised will go to the Community Foundation of Middle Tennessee -- an organization that will distribute funds to victims hit hardest by the floods. You can make a donation by calling 1-800-768-6274 or by clicking here.

Dierks Bentley, himself a flood victim with a few feet of water in his own house, was one of the stars answering phones, which he reported were ringing off the hook with calls from all over the country. "Any amount of money helps," he said. "It's going to take many months, maybe years, restoring Nashville back to its former glory. But it's a great sense of community here in Nashville. We appreciate you guys calling in!" 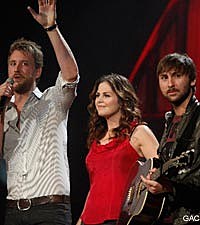 More than $44,000 was raised before the phones even started ringing, just from ticket sales for the sold-out event at the Ryman, where Lady Antebellum were next to take the stage. Lady A singer Hillary Scott, who was born and raised in Nashville, pleaded with viewers to call in even the smallest donation, emphasizing that every dollar counts. "I know we'll get back to the city we once were," she said, before the trio launched into a toned-down, gorgeous version of their No.1 crossover smash, 'Need You Now,' accompanied only by one guitar and a piano.

Dierks was the next performer, and instead of playing one of his own hits, he chose a Sam Bush song to cover, 'Gold Heart Locket,' accompanied by Sam himself. "What a great night for Nashville, to see this kind of turnout," he said. "I've been thinking all week of the right song to do, and my buddy Sam Bush, one of the greatest mandolin players on the planet -- I dug this song off his record. It's about a river and undying love. I've been singing it all week, so I thought I'd show you guys what's been going on in my mind."

Martina McBride, a Nashville resident for the past 20 years, was up next. "I thought I'd do a song to offer hope and encouragement to all the people who are going through this devastating time right now. I also thought I'd do a song to reach out and inspire people to give ... to help rebuild the city we love so much. These people are not celebrities, they're just hard working people who have lost everything," she said, then amazing the audience with her angelic vocals on 'Anyway' -- a song tremendously fitting for the night. 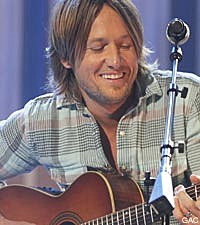 Keith Urban, a Nashvillian by way of Australia, was next, as ladies in the audience shrieked with delight. Alone on stage with just an acoustic guitar, he performed a countrified version of the Beatles' 'Help!'. "We certainly weren't spared -- our place out in Franklin. We had quite a bit of damage. And other than my musical equipment, which floated down the river toward Smyrna [laughs], it's just been a moving experience for me. It's like seeing New Orleans on the television, but all of a sudden it happens in your own city, and it takes on a whole new perspective. So I want to thank everybody," Keith told the audience before then singing his optimistic hit, 'Better Life,' letting the audience take lead vocals during the chorus.

Gospel legend CeCe Winans followed Keith with her powerful pipes on the inspirational 'He's Concerned,' preceded by a moving speech encouraging people to call in. "We know that whenever we face challenges, God uses people to bless other people," said CeCe. "So I want to encourage you tonight to continue to give, and to give your best. Remember God gave His best for us, so we should give our best for one another. He's concerned about you."

Rodney Atkins captured the spirit of community with the fitting 'These Are My People,' as a graphic appeared on the screen indicating funds raised then totaled more than $625,000. 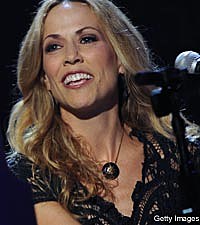 Sheryl Crow was a surprise performer, taking the stage to deafening cheers and performing a brand-new song she'd never played live before. "I'm a newcomer in Nashville. I've lived here for nearly five years. I've lived a lot of different places, but I've never felt home until I moved here," said Sheryl. "What I saw on the news, people volunteering -- I've never known a community like Nashville. My heart goes out to everybody who's suffering through this time."

Kellie Pickler sported an "I Love Nashville" T-shirt for her performance, declaring, "We are Nashville! I couldn't be more proud to be a citizen of Nashville. I love it here, and most importantly, I love the people here. We've got a lot of love in this town and a lot of giving hearts. Thanks for all your love and support ... and all your money! [laughs]" Kellie then told the audience she wanted to "lighten things up a little bit with a happy song," launching into her latest single, 'Making Me Fall in Love Again.'

Brad Paisley was a three-time performer for the evening, taking the stage once again to give a humorous word of advice to those calling in to make donations. "I got hung up on five times!" he told the crowd of answering calls to 1-800-768-6274. "I've said, 'Hello this is Brad Paisley,' and they hung up! So when you call and hear me say, 'Hey this is Brad Paisley,' it's really me!

"I've never seen a community rally like this town has," Brad continued. "There's been hardly any looting. There's been amazing stories of churches that flooded the streets like the river did and help people out. If there's a silver lining, it's that the world is getting to see Nashville at its best through this tragedy." The country superstar then paid tribute to Roger Miller, singing the late legend's 'River and Rain.'

Christian music superstar Jaci Velasquez was next. "It is incredible to watch Nashville come together. The human spirit never ceases to amaze me. We come together, and we watch over our neighbors, and we help them out. But it is our prayers that truly save and fill the hearts of each and every person in this city," said the brunette beauty before singing her hit, 'On My Knees.'

After an encore performance by Lady Antebellum of their first No. 1 hit, 'I Run to You,' it was announced that donations were up to more than $1.2 million. Increase that number by clicking here, with every dollar going directly to middle Tennessee flood victims. 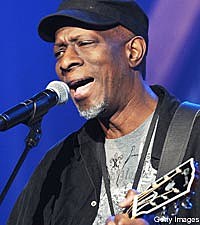 Blues guitar great (and brand-new Nashville resident) Keb 'Mo was up next, accompanied on the banjo by Chris Rodriguez, who plays in Keith Urban's band. The two had the audience clapping to the beat of 'A Better Man.'

Country newcomer Randy Montana had the next performance slot, singing his debut hit 'Ain't Much Left of Loving You.' Dierks Bentley followed with an encore performance, singing 'You Hold Me Together,' then staying on stage to accompany Brad Paisley on 'American Saturday Night.'

Country-rocker Will Hogue, who grew up just south of Nashville, closed the night with his fitting tune, 'Washed by the Water,' as graphics flashed on the screen indicating donations at the end of the live broadcast totaled almost $1.6 million. But it's not too late to make that number bigger. Click here to help the thousands of Tennesseans who lost everything in the devastating floods. Like Dierks said, any amount of money helps.

Watch some of the night's best performances, along with video taking you on a tour of some of Tennessee's hardest hit areas, at GACTV.com.