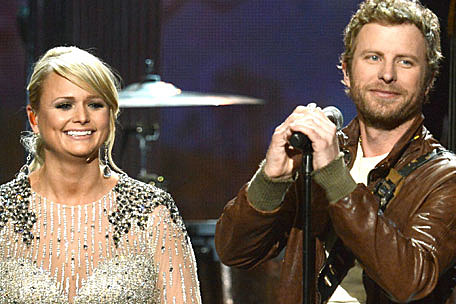 Miranda Lambert is currently criss-crossing the nation with fellow country superstar Dierks Bentley on their Locked & Reloaded tour. The longtime friends have both experienced a lot of changes personally and professionally in the past few years, and onstage their shows have become bigger productions -- and draw bigger crowds -- but behind the scenes, the two have actually mellowed as they've grown older.

"We've been friends for a really long time," Miranda tells The Boot of her kinship with Dierks. "We toured together in 2005. We hang out a lot, but we don't hang out outside of the road, obviously, because he lives in Nashville and I'm in Oklahoma and he's got two little girls, so he's kind of busy. But out here on the road we get along great, our bands and crews get along great. It's just good chemistry. It feels good when you're out here with someone that feels like family."

Now that Dierks and Miranda are both married (he to wife Cassidy and Miranda to Blake Shelton), Miranda is enjoying watching her longtime friend interact with his wife and their daughters, Evie and Jordan.

"Just seeing him grown-up and in that dad role is really cool," says the singer. "We have drinks after the show and party and listen to music, but when his family is out, he's really like super-dad. It's neat to see that. When we toured together the first time, we were kids. We were just running around wild. It's really low-key out here to be honest with you. Now we're both married and a lot of our band members are married, so there's a lot more calmness."

Calm as it may be backstage, it's anything but when the two are onstage. But, Miranda acknowledges, even their past exploits "weren't that out of control. "

"Our parties before weren't crazy, don't get me wrong," she says. "We had a Jäeger[meister] machine and now we don't, basically. We were much younger and much more able to get over hangovers back then. [laughs]."

Keep track of cities and dates on the Locked & Reloaded tour here.