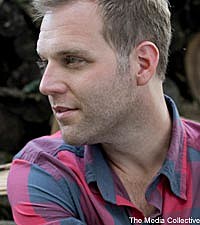 Matthew West has gone to his fans for songs for his upcoming album, 'The Story of Your Life.' The singer/songwriter, who has written songs for Rascal Flatts and Billy Ray Cyrus, put out a notice on his website and social networking pages, asking for stories from people who listen to his music and come to his concerts. He wasn't sure what, or how many responses, he would get.

In the first two days he had 1,000 emails, with people pouring out their hearts to him about their lives. Many began, "I've never told this to anyone before." Some were very said; others very happy. All were written from the hearts and souls of the men and women who submitted letters in response to his request.

"I had no idea I would get this many responses," Matthew tells The Boot. By the end of the process, he had received more than 10,000 letters. "I knew how to write how I see the world, but it was very scary to think I had opened it up to write about how others see the world when I told them to send me their stories."

As Matthew started going through the mail he received, he found central themes among the stories as well as surprising themes throughout the influx of material.

"Through all this I have learned to never underestimate your audience," he says. "You never know who you are singing to or what can happen from your music. These stories made me look at my audience in a different way, but they also told me I'm exactly where I need to be."

One of the hardest parts of writing the album was that fans submitted stories on topics Matthew didn't realize he might have to address. He realized as he read through some of the stories that were heartbreaking that they were topics God wanted him to tackle with his songs. Among them were tales of child abuse, spousal abuse and homes torn apart by drinking and drugs.

"Writing about these things allowed me to see that I have a very narrow view of the world, and they allowed me to look beyond my sheltered life," Matthew admits. "When I would read stories of sexual abuse of children, I first was shocked, then angry, and then I thought about my own children. One of the songs I wrote about this topic was 'Broken Girl.'

"I was doing a show in Seattle and my band told me they thought I should sing this song. We had never sung it live before, but I did it. A few days later, I received an email from a man who had been at that show with his daughter. His letter said, 'You don't have to write my life story; you already did. When you sang 'Broken Girl,' that was about what I had done to an innocent girl, my daughter ... and I have spent many years trying to heal that wrong. She was at the concert with me that night.' Again I realized you just never know who you are reaching at your concerts."

Another scary thing about writing the album was that Matthew wrote most of the songs by himself. He went to a cabin back in a rural area outside of Nashville, and stayed there for two months, reading stories and writing songs. "I love collaborating, and have written with some of the best songwriters in Nashville," he explains. "This time, I felt the songs should be my personal response to the letters that people sent me, so many of them were written while I was alone in that cabin."

While many of the letters were dark, others were very uplifting. 'One Less' is such a song. It relates the hope for children who are adopted and the idea that as each is adopted, there is one less child waiting for his or her loving home.

"I thought at first the record was going to be very down," Matthew admits. "But in the end, it is perhaps the most hopeful record I've ever made. It has given me the chance to be the messenger and storyteller and relate other people's stories to the world."

'The Story of Your Life' will be available in stores October 5.