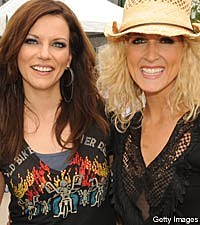 In the recent years, all four members of Little Big Town have experienced the joys of parenthood. Kimberly Schlapman was the first, welcoming daughter Daisy Pearl three years ago this month. Before she became a mother, Kimberly had the unique opportunity to watch one of the most famous moms in country music, Martina McBride, juggle her career and family life.

"We were on the road with Martina while I was pregnant," Kimberly tells The Boot. "She has three girls. I learned a lot about how to raise children on a bus on the road by watching her, because it's just not normal. I've tried to model a bit of her mothering because I've learned a lot from her. She has amazing girls. They have such great personalities."

Kimberly says she sees a lot of the same characteristics in Daisy that Martina's three daughters have. "Daisy knows no stranger. She's in a different city every day and surrounded by different people every day. I think that's so great," she says. "I was so shy as a child. She is not shy one bit. She'll walk up to anyone and say, 'Hi, my name is Daisy. What's your name?' I'm really proud of that. She's a very friendly child, very happy and flexible. She experiences something different every day."

"It's amazing when you think about three families on a bus together," notes Kimberly. "It's amazing how we've learned to work it out and give everyone a little bit of space and a chance to be their own individual family. Yet we all live under a very, very small roof. We've just learned as we've gone along."

This summer, Little Big Town join Sugarland on the road as part of the Incredible Machine tour. Little Big Town's latest single, 'Little White Church,' is currently climbing the Top 15. It's the first release from their forthcoming album, 'The Reason Why,' which will be in stores August 24.